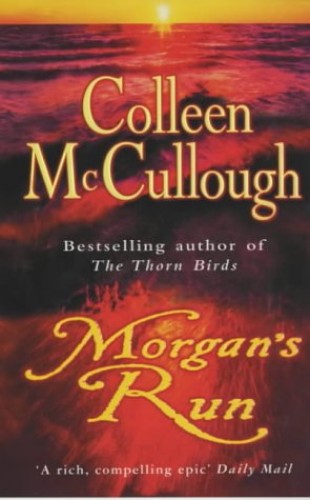 In Stock
£3.99
Richard Morgan - convicted felon and educated, intelligent, resourceful man - finds the will to survive, experience the joys of love, and finally make an indelible mark upon the new frontier.
Very Good Good
5 in stock

It was one of the greatest human experiments ever undertaken: to populate an unknown land with the criminal, the unloved and the unwanted of English society. Amid conditions of brutality that paralleled those of slavery, 'The First Fleet' was sent to a place no European but the legendary Captain Cook had ever seen. Left to live or die on the hostile Australian continent, these convicts - and their equally isolated guards - occupy the centre of Colleen McCullough's compelling new epic. Richard Morgan - convicted felon and educated, intelligent, resourceful man - finds the will to survive, experience the joys of love, and finally make an indelible mark upon the new frontier. A thoroughly researched historical saga rich in romance, adventure and unforgettable characters, Morgan's Run has the makings of a modern classic.

Colleen McCullough was born in Australia. A neurophysiologist, she established the department of neurophysiology at the Royal North Shore Hospital in Sydney, then worked as a researcher and teacher at Yale Medical School for ten years. Her writing career began with the publication of Tim, followed by The Thorn Birds, a record-breaking international bestseller. The author of over ten other novels, including the acclaimed 'Masters of Rome' series, Dr McCullough also wrote lyrics for musical theatre. Until her death in 2015 she lived on Norfolk Island in the Pacific with her husband.

GOR000475968
Morgan's Run by Colleen McCullough
Colleen McCullough
Used - Very Good
Hardback
Cornerstone
2001-08-02
912
0099280981
9780099280989
N/A
Book picture is for illustrative purposes only, actual binding, cover or edition may vary.
This is a used book - there is no escaping the fact it has been read by someone else and it will show signs of wear and previous use. Overall we expect it to be in very good condition, but if you are not entirely satisfied please get in touch with us.