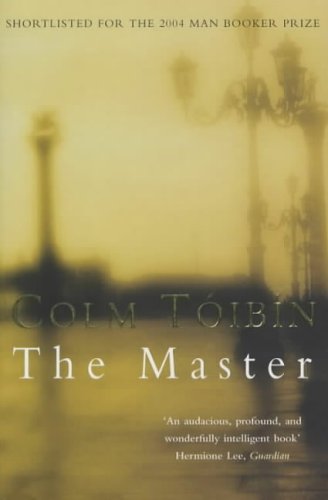 The Master
by Colm Toibin

In Stock
£5.99
Shortlisted for the Man Booker Prize 2004, a remarkable novel about Henry James, the American-born novelist and a connoisseur of exile.
Very Good
12 in stock

The Master by Colm Toibin

In January 1895 Henry James anticipates the opening of his first play, Guy Domville, in London. The production fails, and he returns, chastened and humiliated, to his writing desk. The result is a string of masterpieces, but they are produced at a high personal cost.

In The Master Colm Toibin captures the exquisite anguish of a man who circulated in the grand parlours and palazzos of Europe, who was astonishingly vibrant and alive in his art, and yet whose attempts at intimacy inevitably failed him and those he tried to love. It is a powerful account of the hazards of putting the life of the mind before affairs of the heart.

An audacious, profound, and wonderfully intelligent book. -- Hermione Lee * Guardian *
A marvel of lightly worn research and modulated tone. -- John Updike * New Yorker *
A must read. Colm Toibin has not only written a spectacular novel he has found a way to pay tribute to Henry James. We should all be so gifted and so lucky. -- Alice Sebold, author of The Lovely Bones and Lucky

GOR001157796
The Master by Colm Toibin
Colm Toibin
Picador Classic
Used - Very Good
Paperback
Pan Macmillan
2005-01-21
368
0330485660
9780330485661
Short-listed for Man Booker Prize 2004 (UK)
Book picture is for illustrative purposes only, actual binding, cover or edition may vary.
This is a used book - there is no escaping the fact it has been read by someone else and it will show signs of wear and previous use. Overall we expect it to be in very good condition, but if you are not entirely satisfied please get in touch with us.