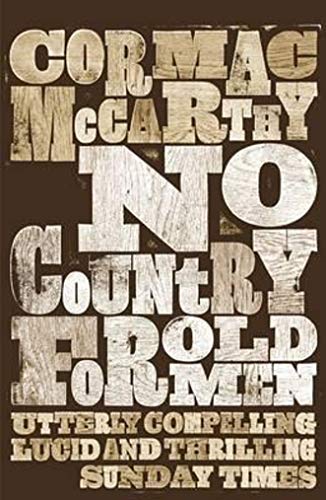 No Country for Old Men
by Cormac McCarthy

No Country for Old Men Summary

No Country for Old Men by Cormac McCarthy

Adapted by the Coen Brothers into an Academy Award winning film, No Country For Old Men is a dark and suspenseful novel from Cormac McCarthy, author of The Road.

Llewelyn Moss, hunting antelope near the Rio Grande, stumbles upon a transaction gone horribly wrong. Finding bullet-ridden bodies, several kilos of heroin, and a caseload of cash, he faces a choice - leave the scene as he found it, or cut the money and run. Choosing the latter, he knows, will change everything. And so begins a terrifying chain of events, in which each participant seems determined to answer the question that one asks another: how does a man decide in what order to abandon his life?

No Country for Old Men Reviews

No Country for Old Men is a severed head and shoulders over anything else written in America this year. * Independent on Sunday *
A Western thriller with a racy plot and punchy dialogue, perfect for a lazy Sunday. * The Times *
[An] utterly absorbing, chilling tale . . . One of the most sinister characters in modern American fiction. * Herald *
A fast, powerful read, steeped with a deep sorrow about the moral degradation of the legendary American West. * Financial Times *
It's hard to think of a contemporary writer more worth reading. * Independent *
No Country for Old Men is a compelling, harrowing, disturbing, sad, endlessly surprising and resonant novel. -- Robert Edric * Spectator *

Cormac McCarthy is the author of many award-winning novels, including Blood Meridian, All the Pretty Horses and The Road. Among his honours are the National Book Award, the National Book Critics Circle Award and the Pulitzer Prize.

GOR001819527
No Country for Old Men by Cormac McCarthy
Cormac McCarthy
Used - Very Good
Paperback
Pan Macmillan
2009-10-27
320
0330511211
9780330511216
N/A
Book picture is for illustrative purposes only, actual binding, cover or edition may vary.
This is a used book - there is no escaping the fact it has been read by someone else and it will show signs of wear and previous use. Overall we expect it to be in very good condition, but if you are not entirely satisfied please get in touch with us.