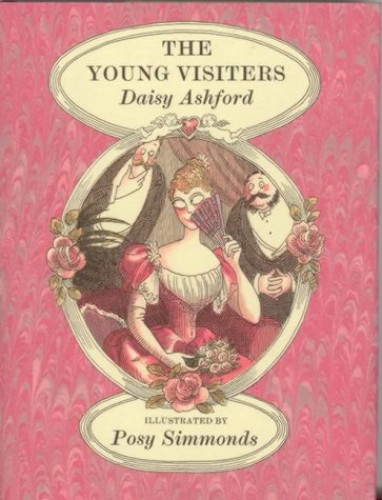 The Young Visiters
by Daisy Ashford

In Stock
£18.99
The Young Visiters or Mr Salteena's Plan is a comic masterpiece that has delighted generations of readers since it was first published in 1919. The BBC1 adaptation of the novel, starring Jim Broadbent as Mr Salteena, was originally broadcast in 2003.
Very Good Good Well Read
7 in stock

The Young Visiters by Daisy Ashford

The Young Visiters or Mr Salteena's Plan is a comic masterpiece that has delighted generations of readers since it was first published in 1919. A classic story of life and love in later Victorian England as seen from the nursery window, it was written in 1890 by nine-year-old Daisy Ashford. It all starts when Alfred Salteena, who is 'not quite the right side of the blanket', takes young Ethel Montacue to stay with his friend Bernard Clarke... Daisy Ashford has an exquisite eye for matchmaking and manners in English society, and her tale, with its hilarious observation and idiosyncratic spelling, is as irresistible today as it ever was. This edition of The Young Visiters is illustrated with drawings by Posy Simmonds which are as enchanting and witty as the story. The text has been transcribed from the original manuscript and includes J.M. Barrie's famous preface to the first edition. The BBC1 adaptation of the novel, starring Jim Broadbent as Mr Salteena, was originally broadcast in 2003.

"Funny and touching... one of my favourite comfort reads" -- Ruth Ware
"[The Young Visiters is] a serious society novel, and takes itself hugely seriously. It ends up being an unwitting parody not only of literature, but of adults as a class of people" -- Caroline O'Donoghue * Guardian *
"One of the most humorous books in literature" -- New York Times

Daisy Ashford (Author) Daisy (Margaret Mary Julia) Ashford was born in Petersham, Surrey in 1881, the eldest of the three daughters of William Ashford and the sixth child of his wife Emma. She dictated her first story, `The Life of Father McSwiney', when she was four and finished her last `The Hangman's Daughter' when she was fourteen. The Young Visiters was written in 1890 soon after the family moved to Lewes, Sussex. Daisy was thirty-six when The Young Visiters was rediscovered and it was published two years later in 1919. In the following January she married James Devlin and spent the rest of her life in Norfolk. They had four children. Although all five of her other stories that survived from her childhood were published, she never took up writing again. She died in January 1972.Posy Simmonds (Illustrator) Posy Simmonds is the author of many books for adults and children, including Gemma Bovery, Lulu and the Flying Babies and Fred, the film of which was nominated for an Oscar. She has won international awards for her work, including the 2009 Grand prix de la critique bande dessinee for Tamara Drewe. Both Gemma Bovery and Tamara Drewe have been made into successful feature films. She lives in London.

GOR001157553
The Young Visiters by Daisy Ashford
Daisy Ashford
Used - Very Good
Hardback
Vintage Publishing
1984-11-01
80
0701127252
9780701127251
N/A
Book picture is for illustrative purposes only, actual binding, cover or edition may vary.
This is a used book - there is no escaping the fact it has been read by someone else and it will show signs of wear and previous use. Overall we expect it to be in very good condition, but if you are not entirely satisfied please get in touch with us.