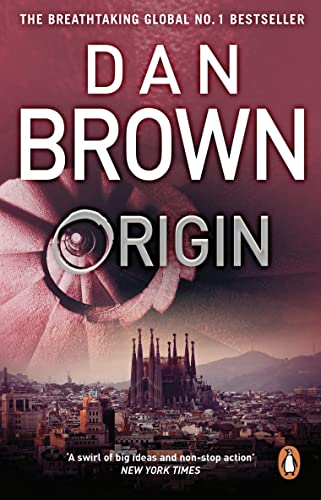 Used Price
£2.99
New RRP £8.99
Free Shipping in the UK
Sunday Times #1 BestsellerNew York Times #1 Bestseller The global bestseller - Origin is the latest Robert Langdon novel from the author of The Da Vinci Code. On a trail marked only by enigmatic symbols and elusive modern art, Langdon and Vidal will come face-to-face with a breathtaking truth that has remained buried - until now.
Like New Very Good Good Well Read

Sunday Times #1 Bestseller New York Times #1 Bestseller The global bestseller - Origin is the latest Robert Langdon novel from the author of The Da Vinci Code. 'Fans will not be disappointed' The Times Robert Langdon, Harvard professor of symbology and religious iconology, arrives at the Guggenheim Museum Bilbao to attend the unveiling of an astonishing scientific breakthrough. The evening's host is billionaire Edmond Kirsch, a futurist whose dazzling high-tech inventions and audacious predictions have made him a controversial figure around the world. But Langdon and several hundred guests are left reeling when the meticulously orchestrated evening is suddenly blown apart. There is a real danger that Kirsch's precious discovery may be lost in the ensuing chaos. With his life under threat, Langdon is forced into a desperate bid to escape Bilbao, taking with him the museum's director, Ambra Vidal. Together they flee to Barcelona on a perilous quest to locate a cryptic password that will unlock Kirsch's secret. To evade a devious enemy who is one step ahead of them at every turn, Langdon and Vidal must navigate the labyrinthine passageways of extreme religion and hidden history. On a trail marked only by enigmatic symbols and elusive modern art, Langdon and Vidal will come face-to-face with a breathtaking truth that has remained buried - until now. `Dan Brown is the master of the intellectual cliffhanger' Wall Street Journal `As engaging a hero as you could wish for' Mail on Sunday `For anyone who wants more brain-food than thrillers normally provide' Sunday Times

"Beautifully observed and really well researched" * BBC TV *
"Fans will not be disappointed" * The Times *
"Read this if you like high stakes drama" * Evening Standard *
"Origin is an imaginative and rattling good tale, the science is accurate and comprehensible and the information on the historic buildings featured are fascinating" * Irish Independent *
"A familiar swirl of big ideas and nonstop action" * New York Times *

Dan Brown is the bestselling author of Digital Fortress, Deception Point, Angels and Demons, The Da Vinci Code, The Lost Symbol and most recently, Inferno. Three of his Robert Langdon novels have been adapted for the screen by Ron Howard, starring Tom Hanks. They have all been international blockbusters. His new Robert Langdon novel, Origin is out now. Dan Brown is a graduate of Amherst College and Phillips Exeter Academy, where he has taught English and Creative Writing. He lives in New England.

GOR009275714
Origin: (Robert Langdon Book 5) by Dan Brown
Dan Brown
Robert Langdon
Used - Like New
Paperback
Transworld Publishers Ltd
2018-07-09
560
0552174165
9780552174169
N/A
Book picture is for illustrative purposes only, actual binding, cover or edition may vary.
The book has been read, but looks new. The book cover has no visible wear, and the dust jacket is included if applicable. No missing or damaged pages, no tears, possible very minimal creasing, no underlining or highlighting of text, and no writing in the margins.