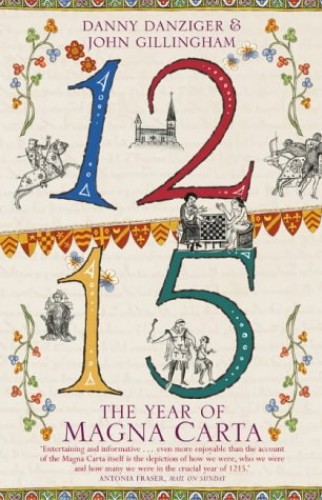 1215: The Year of Magna Carta
by Danny Danziger

In Stock
£2.39
Broad in scope and rich in detail, 1215: THE YEAR OF MAGNA CARTA is a vivid exploration of what may have been the most important year of our lives.
Very Good
8 in stock

1215: The Year of Magna Carta Summary

1215: The Year of Magna Carta by Danny Danziger

On 15 June 1215, rebel barons forced King John to meet them at Runnymede. They did not trust the King, so he was not allowed to leave until his seal was attached to the charter in front of him.

This was Magna Carta. It was a revolutionary document. Never before had royal authority been so fundamentally challenged. Nearly 800 years later, two of the charter's sixty-three clauses are still a ringing expression of freedom for mankind: 'To no one will we sell, to no one will we deny or delay right or justice'. And: 'No free man shall be taken or imprisoned or in any way ruined, except by the lawful judgement of his peers or by the law of the land'.

1215 - THE YEAR OF THE MAGNA CARTA explores what it was like to be alive in that momentous year. Political power struggles are interwoven with other issues - fashion, food, education, medicine, religion, sex. Whether describing matters of state or domestic life, this is a treasure house of a book, rich in detail and full of enthralling insights into the medieval world.

1215: The Year of Magna Carta Reviews

A fascinating, readable digest of social history which has "bestseller" written all over it. * Frank McLynn, Non-fiction read of the week, Sunday *
Entertaining and informative... Even more enjoyable than the account of the Magna Carta itself is the depiction of how we were, who we were and how many we were in the crucial year of 1215. * Antonia Fraser, Mail on Sunday *
Danziger and Gillingham have the knack of walking us right into history and making us feel at home...this is a hugely enjoyable window into medieval life. * Independent *
Danziger and Gillingham write clearly and accessibly to bring their slice of history to life...(they) admirably remind us of the chaotic soil in which the first glimmerings of British political freedom took root. * Simon Jenkins, The Sunday Times *
The disquisitions on education, medicine and agriculture are informative ... delightful. * Times Literary Supplement *
The authors entertain and inform with pertinent reflection...Life in the castles and the violent streets of London, the lure of the crusades and the dominant theme of rural life are all examined with panache. * Oxford Times *
[A] superb account of the year of Magna Carta...fascinating descritpions of life at the time, and of the surrounding world. * Independent *

Danny Danziger was brought up in England and America. Now an award winning columnist for the Sunday Times, he is the author of eight books, including the bestselling Eton Voices and The Year 1000. John Gillingham is professor of history at LSE and the author of a number of highly-regarded academic works on the Middle Ages, as well as the popular history book Medieval Britain: An Introduction.

GOR001125542
1215: The Year of Magna Carta by Danny Danziger
Danny Danziger
Used - Very Good
Paperback
Hodder & Stoughton General Division
2004-05-10
336
0340824751
9780340824757
N/A
Book picture is for illustrative purposes only, actual binding, cover or edition may vary.
This is a used book - there is no escaping the fact it has been read by someone else and it will show signs of wear and previous use. Overall we expect it to be in very good condition, but if you are not entirely satisfied please get in touch with us.