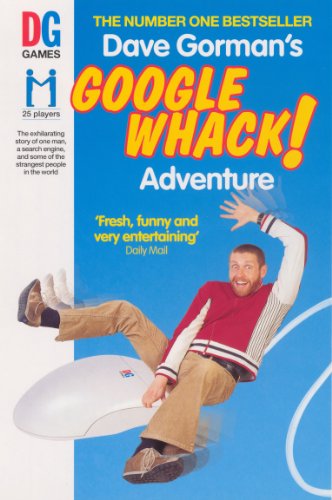 In Stock
£3.99
Addicted to the game, and gripped by obsession, Dave travels three times round the world, visiting four continents and the unlikeliest cast of real life eccentrics you'll ever meet in what becomes an epic challenge, a life-changing, globe-trotting Googlewhack adventure.
Very Good
9 in stock

If someone called you a 'googlewhack' what would you do? Would you end up playing table tennis with a nine year-old boy in Boston? Would you find yourself in Los Angeles wrangling snakes, or would you go to China to be licked by a performance artist? If your name is Dave Gorman, then all of these things could be true. Fuelled by a lust for life and a desperate desire to do anything except what he's supposed to be doing (writing that novel and growing up), Dave falls under the spell of an obscure internet word game - Googlewhacking. Addicted to the game, and gripped by obsession, Dave travels three times round the world, visiting four continents and the unlikeliest cast of real life eccentrics you'll ever meet in what becomes an epic challenge, a life-changing, globe-trotting Googlewhack adventure.

"Very funny" * Independent on Sunday *
"Fresh, funny and very entertaining" * Daily Mail *
"This chronicle of his global search is the best kind of nonsense - totally stupid, incredibly pointless and absolutely hilarious" * Scottish Daily Record *
"A rollicking, funny, sometimes disturbing, high-stakes personal journey with the pace of a thriller. Brilliant" * Melbourne Age *
"Following his hilarious search for his far flung namesakes, this gently but persistently funny book is another to savour" * OK Magazine *

Dave Gorman is an award-winning comedian, storyteller and writer. He has numerous TV writing credits and was part of the double BAFTA-winning team behind The Mrs Merton Show. His live shows have won many awards and he is the only performer to twice win the Jury Prize for Best One Person Show at the prestigious HBO US Comedy Arts Festival. He was the host of Genius, which ran for three series on Radio 4 and then two series on BBC2. He has appeared in numerous other TV shows, including Absolutely Fabulous, The Frank Skinner Show, Late Show with David Letterman, The Tonight Show with Jay Leno and The Daily Show with Jon Stewart. His documentary film, America Unchained, won the Audience Award for Best Documentary Feature at the Austin Film Festival. His 2013 TV show, Modern Life Is Goodish, made for UKTV's Dave channel, saw him dissecting the foibles of modern life in six hour-long comic performances. It quickly established itself as the channel's most successful original programme that year and a further sixteen episodes have been commissioned for broadcast in 2014 and 2015. His ambition is to one day become a team captain on Call My Bluff. www.davegorman.com

GOR001044231
Dave Gorman's Googlewhack Adventure by Dave Gorman
Dave Gorman
Used - Very Good
Paperback
Ebury Publishing
2005-01-06
368
0091897424
9780091897420
N/A
Book picture is for illustrative purposes only, actual binding, cover or edition may vary.
This is a used book - there is no escaping the fact it has been read by someone else and it will show signs of wear and previous use. Overall we expect it to be in very good condition, but if you are not entirely satisfied please get in touch with us.