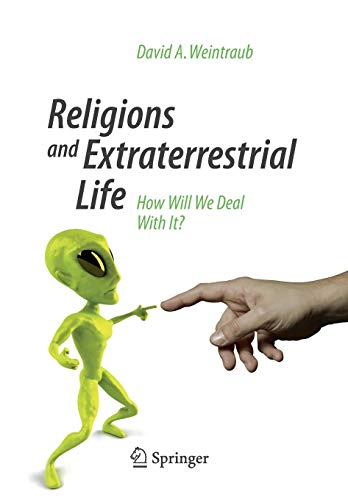 Religions and Extraterrestrial Life by David A. Weintraub

Religions and Extraterrestrial Life: How Will We Deal With It? by David A. Weintraub

In the twenty-first century, the debate about life on other worlds is quickly changing from the realm of speculation to the domain of hard science. Within a few years, as a consequence of the rapid discovery by astronomers of planets around other stars, astronomers very likely will have discovered clear evidence of life beyond the Earth. Such a discovery of extraterrestrial life will change everything.

Knowing the answer as to whether humanity has company in the universe will trigger one of the greatest intellectual revolutions in history, not the least of which will be a challenge for at least some terrestrial religions. Which religions will handle the discovery of extraterrestrial life with ease and which will struggle to assimilate this new knowledge about our place in the universe? Some religions as currently practiced appear to only be viable on Earth. Other religions could be practiced on distant worlds but nevertheless identify both Earth as a place and humankind as a species of singular spiritual religious importance, while some religions could be practiced equally well anywhere in the universe by any sentient beings.

Weintraub guides readers on an invigorating tour of the world's most widely practiced religions. It reveals what, if anything, each religion has to say about the possibility that extraterrestrial life exists and how, or if, a particular religion would work on other planets in distant parts of the universe.

This is a valuable and interesting survey of how many of the world's major religions think about extraterrestrial intelligent life (ETIs). And for those with an interest in, but limited knowledge of, these religions the book also provides a handy introduction into their basic ideas. (Alan Penny, The Observatory, Vol. 135 (1246), June, 2015)

Dr. Weintraub is a Professor of Astronomy and co-Director of the Scientific Computing Program at Vanderbilt University. He earned his PhD in Geophysics and Space Physics from UCLA. His two previous books, Is Pluto a Planet? (2006) and How Old Is the Universe? (2010), were published by Princeton University Press.
Part I: Discovering Extrasolar Planets.- Once Upon a Time.- Pluralism Through Western History.- The Discovery of the Century.- Detecting Exoplanets.- Are Angels Extraterrestrials?.- Part II: Major Religions of the World and Extraterrestrial Life.- Judaism.- Setting the Stage for Modern Christianity.- Roman Catholicism.- Orthodox Christianity.- The Church of England and the Anglican Communion.- Mainline Protestant Christianity.- Evangelical and Fundamentalist Christianity.- From Christian Roots.- Mormonism.- Islam.- Hinduism.- Buddhism.- Jainism.- Sikhism.- Baha'i Faith.- Are We Ready?.- Appendix: The Exoplanets Revealed by the Kepler Mission Through 2013.
GOR007880507
9783319050553
3319050559
Religions and Extraterrestrial Life: How Will We Deal With It? by David A. Weintraub
David A. Weintraub
Springer Praxis Books
Used - Very Good
Paperback
Springer International Publishing AG
20140730
234
N/A
Book picture is for illustrative purposes only, actual binding, cover or edition may vary.
This is a used book - there is no escaping the fact it has been read by someone else and it will show signs of wear and previous use. Overall we expect it to be in very good condition, but if you are not entirely satisfied please get in touch with us
Trustpilot