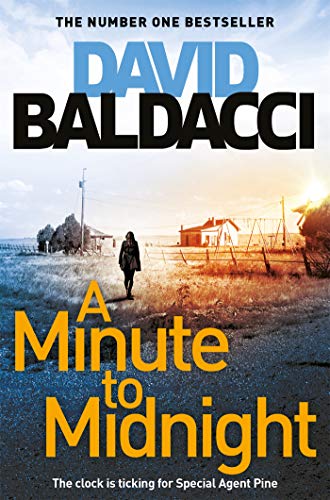 A Minute to Midnight
by David Baldacci

A Minute to Midnight Summary

A Minute to Midnight by David Baldacci

A Minute to Midnight is the gripping follow up to Long Road to Mercy featuring Special Agent Atlee Pine from one of the world's most favourite thriller writers, David Baldacci.

At six years old, Atlee's twin sister, Mercy, was taken from the family home while Atlee was left for dead. Since that fateful night, Atlee has dedicated her life and career to catching those who hurt others.

Word of a killer.

Atlee has never stopped searching for answers about her sister. A notorious serial killer, locked in a maximum-security prison, continues to haunt her. Does he really know what happened to Mercy?

When Atlee oversteps the mark on the arrest of a dangerous criminal, the FBI gives her a leave of absence - the perfect opportunity to return to where it all began.

Determined to finally uncover the truth, Atlee Pine's journey home turns into a rollercoaster ride of murder, long-buried secrets and lies . . . and a revelation so personal that everything she once believed is fast turning to dust.

A Minute to Midnight Reviews

David Baldacci is one of the world's bestselling and favourite thriller writers. With over 130 million copies in print, his books are published in over eighty territories and forty-five languages, and have been adapted for both feature-film and television. David is also the co-founder, along with his wife, of the Wish You Well Foundation (R), a non-profit organization dedicated to supporting literacy efforts across the US.

GOR010632368
A Minute to Midnight by David Baldacci
David Baldacci
Atlee Pine series
Used - Like New
Paperback
Pan Macmillan
2020-07-09
656
1509874488
9781509874484
N/A
Book picture is for illustrative purposes only, actual binding, cover or edition may vary.
The book has been read, but looks new. The book cover has no visible wear, and the dust jacket is included if applicable. No missing or damaged pages, no tears, possible very minimal creasing, no underlining or highlighting of text, and no writing in the margins.