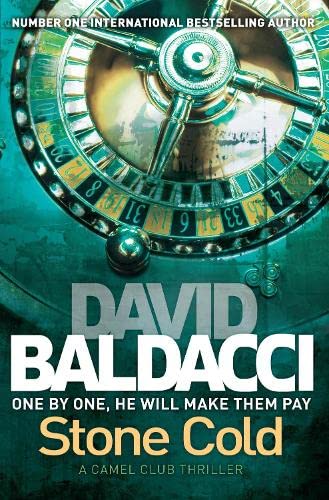 In Stock
£4.49
The unputdownable thriller from the author of The Collectors - a razor-sharp story of revenge, conspiracy, and murder . . .
Very Good Good
19 in stock

Stone Cold by David Baldacci is the third exhilarating thriller in the bestselling Camel Club series.

Oliver Stone and the Camel Club are back for their most dangerous adventure yet.

Casino king and vicious thug Jerry Bagger is hunting Annabelle Conroy, who conned him out of millions. Stone and his colleagues must marshal all their resources to protect her.

Yet their skills may not be enough when a deadly new opponent rips off the veneer of Stone's own mysterious past: Bagger's menace pales next to Harry Finn's lethality.

As bodies and institutions topple, the story rockets toward a shattering finale that will leave the survivors of this explosive tale changed forever . . .

"Baldacci brings an insider's savvy to his tale." -- New York Times Books Review
"Baldacci does an excellent job of setting the scene and creating complex characters. (A) gripping page turner." -- Associated Press
"The action is explosive. Readers will barely have time to catch their breath." -- People magazine
"He's hit the jackpot again...Baldacci pushes the pace pedal to the floor and takes the turns on two wheels." -- New York Daily News

GOR000381475
Stone Cold by David Baldacci
David Baldacci
The Camel Club
Used - Very Good
Paperback
Pan Macmillan
2008-07-04
528
0330450980
9780330450980
N/A
Book picture is for illustrative purposes only, actual binding, cover or edition may vary.
This is a used book - there is no escaping the fact it has been read by someone else and it will show signs of wear and previous use. Overall we expect it to be in very good condition, but if you are not entirely satisfied please get in touch with us.