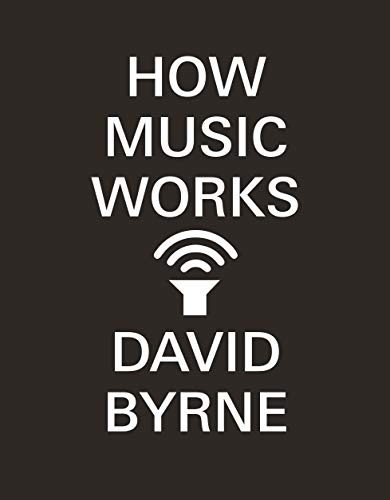 How Music Works
by David Byrne

How Music Works by David Byrne

How Music Works is David Byrne's bestselling, buoyant celebration of a subject he has spent a lifetime thinking about. Drawing on his own work over the years with Talking Heads, Brian Eno, and his myriad collaborators - along with journeys to Wagnerian opera houses, African villages, and anywhere music exists - Byrne shows how music emerges from cultural circumstance as much as individual creativity. It is his magnum opus, and an impassioned argument about music's liberating, life-affirming power.

It was wildly ambitious to try and turn this galaxy of theory into a readable work of scholarship but Byrne has done it, and done it with style. Brian Eno might as well cancel that book deal now -- Mark Ellen * * The Observer * *
As well as being an investigation into the context in which music is made, How Music Works is an accomplished celebration of an ever-evolving art form that can alter how we look at ourselves and the world -- Fiona Sturges * * Independent * *
Brilliantly original * * New York Times Book Review * *
As accessible as pop yet able to posit deep and startlingly original thoughts and discoveries in almost every paragraph . . . this book will make you hear music in a different way -- Oliver Keens * * The Sunday Telegraph * *
A very involving read - Byrne is good company - he has a gift for a telling analogy that makes complex points easily grasped -- Keith Bruce * * The Herald * *
How Music Works is a melange of bookish musings on how music is shaped by the places it is played and the technology used to create and disseminate it -- Danny Eccleston * * MOJO * *
An entertaining and erudite book . . . this is a serious, straight-forward account of an art from that also manages to be inspiring -- Peter Aspden * * Financial Times * *
Given the vastness of the subject, calling a treatise How Music Works seems intellectually arrogant, but it could also be seen as disarmingly frank, a fresh perspective from a down-to-earth mind. David Byrne's book, although a self-conscious art object (backwards pagination, upholstered cover and so on) contains plenty of plain-spoken, sensible observations: a dichotomy typical of the man * * Guardian * *
Incisive and intriguing -- Nick Curtis * * The Evening Standard * *
How Music Works is not just a noticeably handsome book but a beguiling and hugely perceptive one too -- Jonathan O'Brien * * Sunday Business Post * *
The finest music book of the year . . . Handsomely bound, beautifully printed, wittily illustrated, it would make a beautiful collector's item but there is much more going on between the covers . . . bursting with a sense of free-flowing curiosity -- Neil McCormick * * The Daily Telegraph * *
Creators of all stripes will find much to inspire them in Mr Byrne's erudite musings on the biological and mathematical underpinnings of sound. . . His observations on the nature of pattern and repetition, and on people's neurological response to aesthetic experience, apply to all creative fields * * The Economist * *
It's a great book to pick up and start at any chapter, a hugely rewarding and enriching read. A fascinating look at music from many angles, I would receommend it to anyone who plays or simply has an interest in the history and evolution of the musical form, the culture of music, both as a well of inspiration and as a simple commodity * * Irish Times * *
By investigating how music works, Byrne shows us how best it can be used. We are all the richer for his effort -- Yo Zushi * * New Statesman * *
Fascinating look at music's power to move -- Alexis Petridis * * The Guardian * *
A big beautiful work of art. . . As you might expect from someone as intelligent and open-minded as Byrne, How Music Works is a far ranging and astute look at all the facets of music -- Doug Johnstone * * The Big Issue * *
Disarmingly frank, a fresh perspective from a down-to-earth mind -- Michel Faber * * The Guardian * *
Inspiring * * Financial Times * *
An ambitious attempt at understanding a phenomenon to which the former Talking Head has dedicated his life's work -- John Doran * * Quietus * *
Extraordinary * * Guardian * *
Unique among a deluge of music biographies and autobiographies coming out this Christmas, this wildly ambitious book breaks the mould -- Arthur House * * The Sunday Telegraph * *
Byrne is a crisp and enthusiastic guide -- Rob Fitzpatrick * * The Sunday Times * *
Absorbing * * Independent * *
[A] wide-ranging tome -- Geeta Daval * * Wired Magazine * *
A fluid, intelligent analysis -- Patrick Freyne * * The Irish Times * *
Satisfying * * MOJO * *

David Byrne is a Scottish-born Rock and Roll Hall of Famer and co-founder of Talking Heads. He has been the recipient of many awards, including an Oscar and a Golden Globe. The author of Bicycle Diaries and The New Sins, Byrne lives in New York City.

GOR005119493
How Music Works by David Byrne
David Byrne
Used - Very Good
Paperback
Canongate Books Ltd
2013-09-19
376
0857862529
9780857862525
N/A
Book picture is for illustrative purposes only, actual binding, cover or edition may vary.
This is a used book - there is no escaping the fact it has been read by someone else and it will show signs of wear and previous use. Overall we expect it to be in very good condition, but if you are not entirely satisfied please get in touch with us.