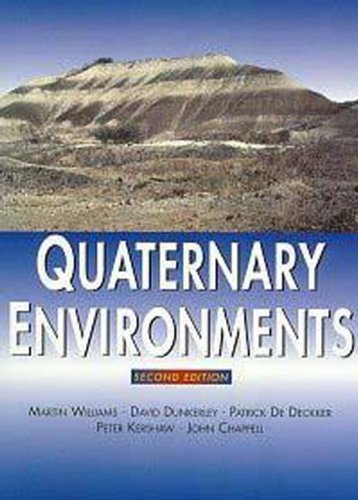 In Stock
£4.49
Focusing on the interactions between geological, biological and hydrological processes, this book explores the effects of human impact on the environment and considers how far evidence from the Quartenary may be useful in predicting environmental change. It includes a chapter on the Milankovitch theory and its implications.
Very Good Well Read
Only 3 left

The second edition of this authoritative introduction to the global environmental fluctuations of the Quaternary period has been thoroughly revised and updated, and now includes two new chapters: one on Quaternary glaciations, its causes and feedback mechanisms, and one on the Milankovitch theory and its implications for Quaternary climatic oscillations. The book draws on examples from every continent, including Antarctica, and features a superb range of maps and illustrations. The time span covered includes relevant events during the Tertiary which set the stage for the Quaternary glaciations and associated changes in climate, vegetation, and prehistoric human development. Focusing on the interactions between geological, biological and hydrological processes, the book explores the effects of human impact on the environment and considers how far evidence from the Quartenary may be useful in predicting future environmental change.

The strengths of Quaternary Environments lies in its authoritative style, breadth of coverage both systematic and regional...and emphasis on linkages between the different components of the natural environment.
The Times Higher Educational Supplement

...a world-beating authoritative and scholarly text...useful, stimulating textbook which presents evidence for Quaternary environmental changes with an impressive global perspective.
The Holocene

A world-beating authoritative and scholarly text which eclipses many simiular book on the market...most comprehensive account...illustrated, extensively referenced...should be consdiered a must for bookshelves of researchers and graduates
The Holocene

Clearly written and well structured. Figures and tables are impressive. Altogether this is an exciting book that can be highly reccomended to anyone interested in learning more about quartenary environments.
Journal of Atmospheric chemistry

Very likely to become the standard source of information for anyone interested in quaternary research. A valuable source of information even for advanced researchers.The contents have been chosen with great care and thoughtfulness. Not only the contents but also the presentation and the didactic quality of the book leaves no room for criticism. The layout of the book is state-of-the-art, graphs and pictures are clear and of superb quality and the price is acceptable.
Journal of Quaternary Science

The second edition of a very fine textbook that should prove valuable to students of this increasingly important field of study. The authors are to be congratulated. A team of distinguished Australian university academics each one of whom has a deservedly excellent reputation in the various subdisciplines associated with the increasingly popular field of Quaternary science. Aimed primarily at the undergraduate market. Nevertheless, there is enough detail and development here to provide very useful and up-to-date resources for postgraduate students and researchers.
Progress in Physical Geography

GOR004417948
Quaternary Environments, 2Ed by David Dunkerley
David Dunkerley
Used - Very Good
Paperback
Taylor & Francis Ltd
1998-08-28
352
0340691514
9780340691519
N/A
Book picture is for illustrative purposes only, actual binding, cover or edition may vary.
This is a used book - there is no escaping the fact it has been read by someone else and it will show signs of wear and previous use. Overall we expect it to be in very good condition, but if you are not entirely satisfied please get in touch with us.