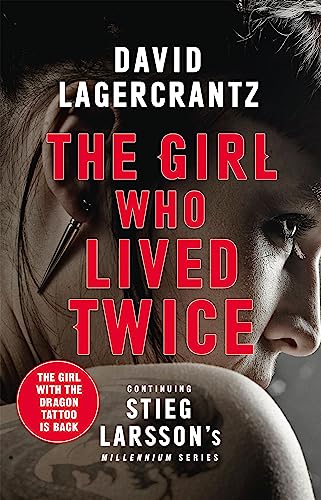 **THE GIRL WITH THE DRAGON TATTOO IS BACK!**

As Salander follows the scorched trail of her twin sister to Moscow, Blomkvist fears for her safety.

He should, perhaps, be more concerned for himself. The murder of a homeless man on the streets of Stockholm has drawn him into a conspiracy that scales the heights of Everest and plunges to the depths of Russia's criminal underworld.

And now Lisbeth will face her nemesis. For the girl with the dragon tattoo, the personal is always political - and ultimately deadly.

GOR010533705
The Girl Who Lived Twice: A Thrilling New Dragon Tattoo Story by David Lagercrantz
David Lagercrantz
Millennium
Used - Like New
Paperback
Quercus Publishing
2020-03-31
368
0857056395
9780857056399
N/A
Book picture is for illustrative purposes only, actual binding, cover or edition may vary.
The book has been read, but looks new. The book cover has no visible wear, and the dust jacket is included if applicable. No missing or damaged pages, no tears, possible very minimal creasing, no underlining or highlighting of text, and no writing in the margins.