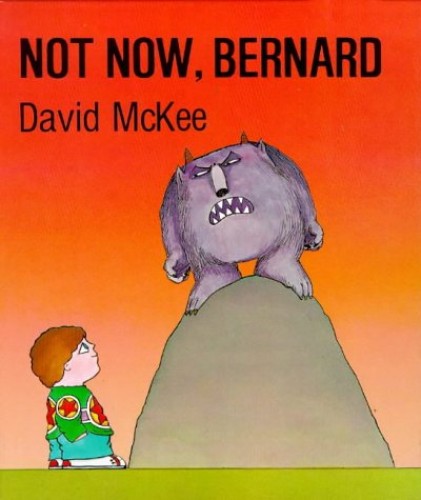 Not Now, Bernard
by David McKee

Used Price
£7.19
New RRP £9.99
Free Shipping in the UK
A humorous story in which a young boy is exasperated by his parents refusal to listen to him, so he decides to make them take notice.
Reviews:
Trustpilot
Very Good Good Well Read

Not Now, Bernard by David McKee

The perennial and well-loved classic picture book story about parents too preoccupied to notice their own child. Bernard's parents are so busy doing their own thing, that the monster can eat Bernard's dinner, break his toys, and even eat Bernard, without being noticed!

"My favourite books for very young children are Where the Wild Things Are by Maurice Sendak and Not Now Bernard by David McKee." -- Michael Rosen
"Not Now Bernard is THE book of our times" * Frank Cottrell-Boyce *
"It's so good!" * Adam Buxton *
"Possibly my favourite picture book of all time. It's so powerful, it's so funny, dark - it's everything. That to me is the number one kids book of all time... It's funny to a four year old and meaningful to a 36 year old" * Ben Bailey Smith aka Doc Brown *
"Even very young children see the joke." * T.E.S. *

David is the creator of well-known characters including King Rollo, Mr Benn and Elmer the Patchwork Elephant, which is now published in more than 50 languages and has its own successful global merchandise programme. David McKee was born in Devon and went to Plymouth Art College, where he had a traditional training. On leaving college he drew regularly for Punch, Reader's Digest, and The Times Educational Supplement. His drawings were influenced especially by Saul Steinberg and Andre Francois. David lives in Arles, France.

GOR003603594
Not Now, Bernard by David McKee
David McKee
Used - Very Good
Hardback
Andersen Press Ltd
1980-04-21
32
0905478711
9780905478715
N/A
Book picture is for illustrative purposes only, actual binding, cover or edition may vary.
This is a used book. We do our best to provide good quality books for you to read, but there is no escaping the fact that it has been owned and read by someone else previously. Therefore it will show signs of wear and may be an ex library book.