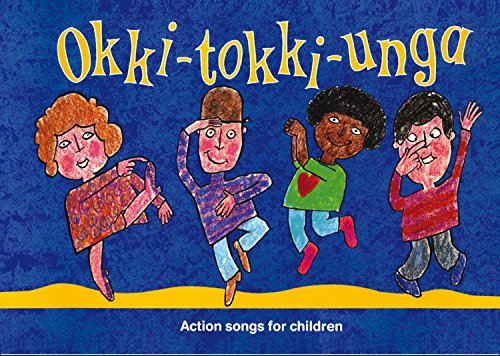 The greatest ever collection of action songs for little children!
Everything from the sizzling Ten fat sausages to the hilarious No laugh race with all manner of toe tapping, hand clapping, nose wiggling, wriggling and giggling in between. Every early years setting and primary school should have one.

The greatest ever collection of action songs for little children!
Everything from the sizzling Ten fat sausages to the hilarious No laugh race with all manner of toe tapping, hand clapping, nose wiggling, wriggling and giggling in between. Every early years setting and primary school should have one.

The collection is in the familiar songbook format with sturdy wire-o binding to keep the book open at the song you're singing. Each song has a simple piano accompaniment and guitar chords and the words are brought to life by illustrator David McKee's wonderfully comical little people, performing all the actions to show you how.

Recordings of all the songs with backing tracks are available separately on CD.

Part 1 Fingers, feet, numbers, beat: bits of the body - heads, shoulders, knees and toes, put your finger on your head, nicky, knacky, knocky, noo, Looby Loo; fingers for counting - six little ducks, five little monkeys, ten fat sausages, ten little squirrels, the ants go marching, this old man, Alison's camel; feet on the beat - have you any bread and wine?, the prehistoric animal brigade; hands on the beat - the animal fair, Miss Mary Mac, the wild oak tree. Part 2 Acting out songs: songs about doing things - Johnny taps with one hammer, cousin Peter, I jump out of bed in the morning, can you tell me?, of, we can play on the big bass drum, the music man; songs with simple actions - the wheels on the bus, this way, that-a way, bobbing up and down like this, 'neath the spreading chestnut tree, fishing; songs with lots to mime - I'm a little teapot, eat brown bread, the galloping major, let's all play at Indians, Mister Banjo, the grand old Duke of York; tell me a story - the three bears, the wise man and the foolish man, okki-tokki-unga, the princess, old Roger, Miss Polly, in a cottage in a wood, 'neath the lilacs. Part 3 Fun songs: how ridiculous! - do your ears hang low?, after the ball was over; actions to catch you out - a sailor went, to sea, sea, sea, my hat it has three corners, John Brown's baby, someone's in the kitchen with Dinah, one finger, one thumb, keep moving. Part 4 Game songs: can you copy me? - everybody do this, did you ever see a lassie?, join in the game; whose turn is it now? - one elephant, Sally Saucer, a-tisket, a-tasket, the no-laugh race.

GOR001550357
Songbooks - Okki-Tokki-Unga: Action Songs For Children by David McKee
David McKee
Songbooks
Used - Very Good
Paperback
HarperCollins Publishers
1994-11-24
96
0713640782
9780713640786
N/A
Book picture is for illustrative purposes only, actual binding, cover or edition may vary.
The book has been read but remains in clean condition. All pages are intact and the cover is intact. Some minor wear to the spine.