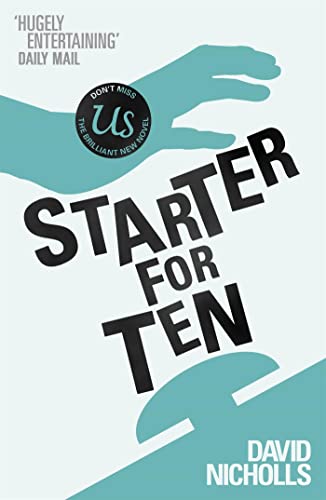 Starter For Ten
by David Nicholls

Used Price
£2.99
New RRP £8.99
Free Shipping in the UK
A comedy masterpiece from the internationally bestselling author of ONE DAY and THE UNDERSTUDY.
Very Good Good

Starter For Ten by David Nicholls

The debut bestseller from the author of the phenomenally successfully ONE DAY and Man Booker longlisted US. STARTER FOR TEN is a comedy about love, class, growing-up and the all-important difference between knowledge and wisdom.

It's 1985 and Brian Jackson has arrived at university with a burning ambition - to make it onto TV's foremost general knowledge quiz. But no sooner has he embarked on 'The Challenge' than he finds himself falling hopelessly in love with his teammate, the beautiful and charismatic would-be actress, Alice Harbinson.

When Alice fails to fall for his slightly over-eager charms, Brian comes up with a foolproof plan to capture her heart once and for all. He's going to win the game, at any cost, because - after all - everyone knows that what a woman really wants from a man is a comprehensive grasp of general knowledge . . .

STARTER FOR TEN is a comedy about love, class, growing-up and the all-important difference between knowledge and wisdom. Are you up to the challenge of the funniest novel in years?

Starter for Ten is the debut of the year; a recommendation repeated by all who come in contact with it ... Trust us, you'll love it * Arena *
Nicholls' portrayal of student affectations is accurate and funny ... clever and well-written * Independent *
Brilliant... we would recommend it to anyone * Richard Madeley and Judy Finnigan *
A funny, touching novel reminiscent of the classic film Gregory's Girl with an authentic 1980s backdrop * Sunday Mirror *

GOR000533180
Starter For Ten by David Nicholls
David Nicholls
Used - Very Good
Paperback
Hodder & Stoughton General Division
2004-07-19
368
0340734876
9780340734872
N/A
Book picture is for illustrative purposes only, actual binding, cover or edition may vary.
This is a used book - there is no escaping the fact it has been read by someone else and it will show signs of wear and previous use. Overall we expect it to be in very good condition, but if you are not entirely satisfied please get in touch with us.