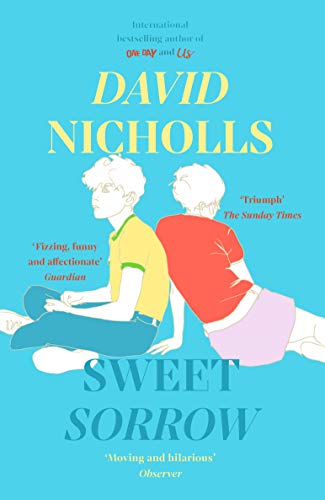 In Stock
£5.49
The major new novel from David Nicholls.
Very Good
Only 1 left

Sweet Sorrow: the long-awaited new novel from the bestselling author of ONE DAY by David Nicholls

8 million copies
since STARTER FOR TEN first introduced us to his
incomparable talent for making us laugh, cry
and wince with recognition in the space of a single sentence;
ten years
after ONE DAY became the iconic love story for a generation;
five years
since the journey of US took him to the Man Booker Prize long-list;
DAVID NICHOLLS has written a major new novel, SWEET SORROW:
a hymn to the tragicomedy of ordinary lives, a celebration of the reviving power of friendship and that brief, blinding explosion of first love that perhaps can only be looked at directly once it has burned out.

'Nicholls writes with such tender precision about love'
The Times

'There is a sharp empathetic intelligence to his writing that makes his characters real . . . the clear writing often dazzles with truth . . . sad funny, soulful'
Observer

'Nicholls' ability to create and then subvert the traditional plot for comedy is the secret of his success. It makes us confront the gap between what we expect from storytelling and what happens in real life'
Spectator

I don't think anyone writing right now captures youth and adolescence better; I'm not sure anyone even gets close. -- Jenny Colgan, author of The Little Shop of Happy-Ever-After
Such a beautiful book. Captures perfectly a moment in time we've all experienced. -- Graham Norton
It's just perfect in every way. -- Jill Mansell
Funny, engaging and moving, another triumph from the brilliant David Nicholls. -- John Boyne
Astutely observed, and almost painfully nostalgic, SWEET SORROW reads like a true story. -- Clare Mackintosh
It's everything a story should be. Beautiful and clear and heartfelt, and it will do what all brilliant stories do: it will find the very pinpoint of who you are and it will stay there. -- Joanna Cannon
He's such a genius. His novels are relatable and recognizable, but also surprising, breath-taking and life-enhancing -- Nina Stibbe
Few pleasures in life compare to a David Nicholls novel and this is his best yet. -- Donal Ryan
Praise for David Nicholls * - *
Nicholls's gift is character. There is a sharp empathetic intelligence to his writing that makes his characters real . . . the clear writing often dazzles with truth . . . sad funny, soulful * Observer *
David has a sublime talent for illuminating the murky causeway that most of us have to navigate between darkness and light -- Donal Ryan
Nicholls writes with such tender precision about love * The Times *

David Nicholls is the bestselling author of Us, One Day, The Understudy and Starter for Ten. His novels have sold over eight million copies worldwide and are published in forty languages.

David trained as an actor before making the switch to writing. He is an award-winning screenwriter, with TV credits including the third series of Cold Feet, a much-praised modern version of Much Ado About Nothing, The 7.39 and an adaptation of Tess of the D'Urbervilles. David wrote the screenplays for Great Expectations (2012) and Far from the Madding Crowd (2015, starring Carey Mulligan). He recently won a BAFTA for Patrick Melrose, his adaptation of the novels by Edward St Aubyn, which also won him an Emmy nomination.

His bestselling first novel, Starter for Ten, was selected for the Richard and Judy Book Club in 2004, and in 2006 David went on to write the screenplay of the film version.

His third novel, One Day, was published in 2009 to extraordinary critical acclaim, and stayed in the Sunday Times top ten bestseller list for ten weeks on publication. One Day won the 2010 Galaxy Book of the Year Award.

David's fourth novel, Us, was longlisted for the Man Booker Prize for Fiction 2014 and was another no. 1 Sunday Times bestseller. In the same year he was named Author of the Year at the National Book Awards.

GOR010675513
Sweet Sorrow: the long-awaited new novel from the bestselling author of ONE DAY by David Nicholls
David Nicholls
Used - Very Good
Paperback
Hodder & Stoughton General Division
2018-06-21
400
1444715429
9781444715422
N/A
Book picture is for illustrative purposes only, actual binding, cover or edition may vary.
This is a used book - there is no escaping the fact it has been read by someone else and it will show signs of wear and previous use. Overall we expect it to be in very good condition, but if you are not entirely satisfied please get in touch with us.