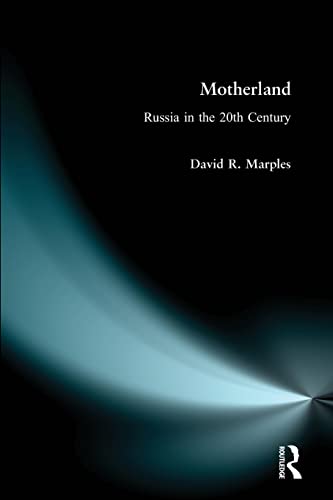 David Marples looks back at the Soviet century and examines the relationship between the Communist state and the Russian national idea. He concludes that ultimately, it was the ideal of the motherland that brought about the end of communism in Russia.

Motherland: Russia in the Twentieth Century by David R. Marples

Motherland tells the dramatic story of the rise and fall of the Soviet Union. From Lenin's virtual coup in November 1917 to Boris Yeltsin's ruthless takeover of power in 1991, the book culminates with a new view of the Yeltsin years.

David Marples focuses on the evolution of Russia during the Soviet period, and the attempt to harness Russian nationalism to the avowed Soviet mission of promoting World Communism. Along the way heanalyses some of the more intensive historical debates and uncovers some of the myths perpetuated by state propaganda, especially those associated with the Great Patriotic War.

'A brisk, refreshing tour d'horizon of Russia and the Soviet Union in the twentieth century. The author deployes his specialist knowledge of Ukraine and Belarus to telling effect in analysing the multi-ethnic Soviet Union. Very readable, up-to-date and thought provoking Is Russia still a mystery? Read this book'

David Marples is Professor of History at the University of Alberta. He is the author of eight previous books on Russia and the Soviet Union and has a particular interest in the issue of nationalities. He served as a regular consultant on Soviet issues to the governments of Canada and the USA and is uniquely placed to write the definitive account of modern Russia

GOR001065765
Motherland: Russia in the Twentieth Century by David R. Marples
David R. Marples
Used - Very Good
Paperback
Taylor & Francis Ltd
2002-07-25
388
0582438349
9780582438347
N/A
Book picture is for illustrative purposes only, actual binding, cover or edition may vary.
This is a used book - there is no escaping the fact it has been read by someone else and it will show signs of wear and previous use. Overall we expect it to be in very good condition, but if you are not entirely satisfied please get in touch with us.