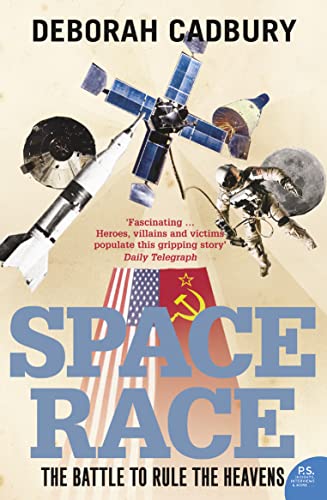 From the author of `Seven Wonders of the Industrial World', the paperback edition of the TV tie-in charting the shocking but true story behind the space race - and the ruthless, brilliant scientists who fuelled it.

Space Race: The Battle to Rule the Heavens by Deborah Cadbury

From the author of `Seven Wonders of the Industrial World', the paperback edition of the TV tie-in charting the shocking but true story behind the space race - and the ruthless, brilliant scientists who fuelled it.

With the end of the Cold War it is now possible to reveal its generation of secrets and cover-ups, bringing an historical opportunity: the unmasking of the true heroes and villains behind the race to be the first to conquer space.

This is one of the greatest stories in history, beginning in the throes of the Second World War and spanning through to the moon landings. With the US and Russia pitched against one another during the Cold War, it was the race to create the most powerful rocket and dominate the world, culminating in 1969's 'giant leap for mankind'. The most pioneering and high-risk experiments ever undertaken cost untold millions - and hundreds of lives, as mistakes were made, some too horrific to be made public.

It is a tale that plays out against a backdrop of communism and espionage. Buried within this multi-million-dollar battle between nations, are the dramatic accounts of the individuals who seek to be the winners at any cost. With ex-Nazi Wernher von Braun on the American side pitted against the enigmatic Sergei Korolev on the Soviet side, this revealing new history shows the extent to which politics and personal ambition combined to create an explosive race for the glory of victory.

`This fascinating book illuminates the complex relations between Germany, America and Russia during the space race of the Cold War years...'The Space Race' is much sharper than the usual television tie-in ... Heroes, villains and victims populate this gripping story.' Maggie Gee, Daily Telegraph

`The Lost King of France':
'This is history as it should be. It is stunningly written, I could not put it down. This is the best account of the French Revolution I have ever read.' Alison Weir

`The Dinosaur Hunters':
'Beautifully structured and sympathetically narrated, Cadbury's book benefits from having a subject that successfully brings together science, suspense and sentiment. Something for everyone, then.' Miranda Seymour, Sunday Times

Deborah Cadbury is the award-winning TV science producer for the BBC, including Horizon for which she won an Emmy. She is also the highly- acclaimed author of `The Feminisation of Nature' and `The Dinosaur Hunters'.

GOR001004705
Space Race: The Battle to Rule the Heavens by Deborah Cadbury
Deborah Cadbury
Used - Very Good
Paperback
HarperCollins Publishers
2006-08-07
384
0007209940
9780007209941
N/A
Book picture is for illustrative purposes only, actual binding, cover or edition may vary.
This is a used book - there is no escaping the fact it has been read by someone else and it will show signs of wear and previous use. Overall we expect it to be in very good condition, but if you are not entirely satisfied please get in touch with us.