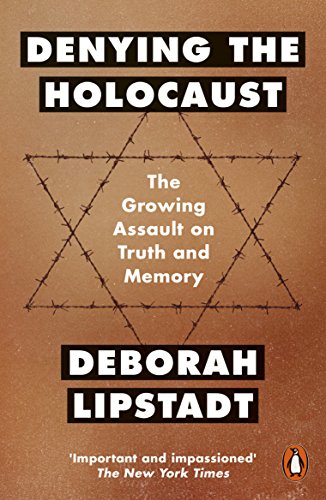 Denying the Holocaust: The Growing Assault On Truth And Memory by Deborah E. Lipstadt

The powerful and deeply disturbing book that was at the heart of the David Irving libel case, now dramatized in the film Denial.

The denial of the Holocaust has no more credibility than the assertion that the Earth is flat. Yet there are those who insist that the death of six million Jews in Nazi concentration camps is nothing but a hoax perpetrated by a powerful Zionist conspiracy. For years those who made such claims were dismissed as harmless cranks operating on the lunatic fringe. But they have now begun to gain a hearing in respectable arenas.

In this famous book, reissued now to coincide with the film based on the legal case it provoked, Denial, Deborah Lipstadt shows how--despite tens of thousands of witnesses and vast amounts of documentary evidence--this irrational idea not only has continued to gain adherents but has become an international movement, with 'independent' research centres, and official publications that promote a 'revisionist' view of recent history. Denying the Holocaust argues that this chilling attack on the factual record not only threatens Jews but has an unsuspected power to dramatically alter the way that truth and meaning are transmitted from one generation to another.

Strong medicine... An antidote to the moral and intellectual virus that has spread from the crackpot fringe to the very heart of public discourse in the media, the courts and the world's universities. * Los Angeles Times *
Important and impassioned... it illuminates with skill and clarity, not only the peculiarly disturbing world of the Holocaust deniers, but also the methods they have used to distort history, the motives that have driven them to do so, and the vulnerabilities of our educational systems, our culture, and ourselves that have made so many in our society ready to listen to them. * New York Times Book Review *

Deborah Lipstadt is the Dorot Professor of Modern Jewish History and Holocaust Studies at Emory University. Her other books are Beyond Belief: The American Press and the Coming of the Holocaust, 1933-1945, History on Trial: My Day in Court with David Irving and The Eichmann Trial.

GOR008257539
Denying the Holocaust: The Growing Assault On Truth And Memory by Deborah E. Lipstadt
Deborah E. Lipstadt
Used - Very Good
Paperback
Penguin Books Ltd
2016-12-08
336
0141985518
9780141985510
N/A
Book picture is for illustrative purposes only, actual binding, cover or edition may vary.
This is a used book - there is no escaping the fact it has been read by someone else and it will show signs of wear and previous use. Overall we expect it to be in very good condition, but if you are not entirely satisfied please get in touch with us.