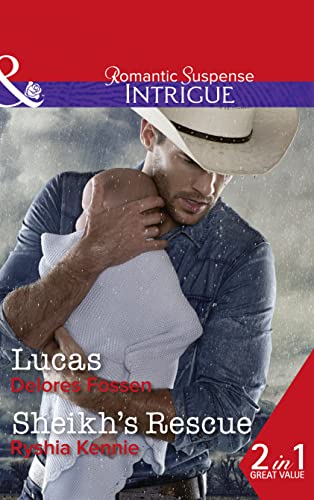 Lucas Ryland always had a way with the ladies-until Hailey Darrow dropped him after a shared night of passion. Then he discovered her unconscious body in a wrecked car, with a fake ID and enough cash to disappear. Unbeknownst to him, the one who got away was leaving town with his baby...

Lucas Ryland always had a way with the ladies-until Hailey Darrow dropped him after a shared night of passion. Then he discovered her unconscious body in a wrecked car, with a fake ID and enough cash to disappear. Unbeknownst to him, the one who got away was leaving town with his baby...

Now Hailey is out of her coma and still in danger. But hiding her at his Silver Creek ranch ignites old passions...and introduces new dangers. Lucas must use every protective instinct in his arsenal to keep Hailey and their infant son safe. And keep his body from remembering how good it felt to hold her in his arms...

Zafir Al-Nassar knows everything about Jade Van Everett. He's studied the cases she's worked for his family's company and for the FBI. And it's hard not to notice that she's absolutely gorgeous. Teaming up for a routine security detail, Jade is desperate to prove herself and Zafir can't help but admire her determination.

But when their assignment turns deadly, it becomes difficult to stay focused on the job. Because although they were hired to protect a Morrocan royal from a trained assassin, Zafir has also every intention of keeping Jade safe and by his side. Forever.

USA Today bestselling author, Delores Fossen, has sold over 70 novels with millions of copies of her books in print worldwide. She's received the Booksellers' Best Award, the Romantic Times Reviewers' Choice Award and was a finalist for the prestigious Rita (R). In addition, she's had nearly a hundred short stories and articles published in national magazines. You can contact the author through her webpage at www.deloresfossen.com Ryshia Kennie is the award-winning author of her city's writing award and a semi-finalist in the Kindle Book Awards. There's never a lack of intriguing places to set an edge-of-the-seat suspense as prairie winters find her dreaming of foreign shores. Those places become the catalyst for heart-stopping stories with deadly villains threatening intrepid heroes and heroines, who battle for their right to live or even to love, in a place that neither - or both, may call home. www.ryshiakennie.com

GOR008243834
Lucas: Lucas (The Lawmen of Silver Creek Ranch, Book 12) / Sheikh's Rescue (Desert Justice, Book 2) by Delores Fossen
Delores Fossen
Used - Very Good
Paperback
HarperCollins Publishers
2017-04-06
448
0263928829
9780263928822
N/A
Book picture is for illustrative purposes only, actual binding, cover or edition may vary.
This is a used book - there is no escaping the fact it has been read by someone else and it will show signs of wear and previous use. Overall we expect it to be in very good condition, but if you are not entirely satisfied please get in touch with us.