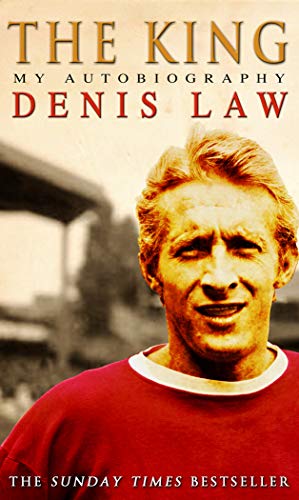 The King
by Denis Law

In Stock
£3.29
In the 1960s, Denis Law was the king of Old Trafford. Packed with hilarious and revelatory behind-the-scenes stories and peopled by Law's fellow football legends like Matt Busby, George Best and Jimmy Greaves, Denis Law's book takes the reader back to the game's glory days.
Very Good
8 in stock

The King by Denis Law

In the 1960s, Denis Law was the king of Old Trafford. A goal-scoring genius, Law attacked the game (and the occasional opponent) with a dedication and enthusiasm which held his legions of loyal subjects in devoted awe. The deadly triumvirate of Law, George Best and Bobby Charlton swept opposition from its path, and led Manchester United to win the FA Cup in 1963 and the League in 1965 and 1967. Born in Aberdeen in 1940, Law played his first professional game for Huddersfield in 1956. He moved to Manchester City before being among the very first British players to play on the continent of Europe, joining Torino in 1961. It was in August 1962 that Law moved back to Manchester, this time to United, for a record transfer fee of GBP115,000. He immediately won the hearts of the Old Trafford crowd by scoring twice in his debut game. Many more goals were to follow: 160 in 222 matches, many of them spectacular, all of them executed with Law's trademark panache. Law was European footballer of the year in 1964 and went on to win 55 caps for Scotland. Many of these were titanic clashes with the Auld Enemy, England, including the now legendary 3-2 defeat of the then World Cup-holders at Wembley in 1967. The King tells the story of an Aberdeen boy who rose to the very pinnacle of footballing excellence from humble beginnings. Packed with hilarious and revelatory behind-the-scenes stories and peopled by Law's fellow football legends like Matt Busby, George Best and Jimmy Greaves, Denis Law's book takes the reader back to the game's glory days. In so doing, we learn why, to his legions of fans, Denis Law was, and will forever remain, the King.

"This intelligent book, packed with anecdotes, is a must for any football fan" * Sunday Mirror *
"Denis was the best in the business, he could score goals from a hundredth of a chance, never mind half of one" -- George Best
"His book is rightly called The King ... We remember Law as the great predator [but] what players like him can offer a reader beyond the tales of muddy glory, is a glimpse into life after sport, when the crowd noise stops and they are faced with reality as we substantially lesser mortals know it" * Daily Telegraph *
"A lovely and lively peek at football's golden age through the eyes of a man who was on the inside track suffering the high and lows. Like the man himself, definitely a winner" * Glasgow Evening Times *
"He played for United and City, served under Busby and Shanks and tasted pleasure and pain ... He has been revisiting all these memories in his autobiography, a book rare in that genre for the author's honesty" * Independent on Sunday *

Denis Law was born in Aberdeen in 1940 and began his football career in Huddersfield. Here he learned the finer arts of the game under the expert tutelage of two shrewd Scottish managers, Andy Beattie and the legendary Bill Shankly, before joining a third Scot, Les McDowall at Manchester City. A move to Italy seemed to offer not only financial security but a place amongst the gods of football, though it quickly turned sour. Another move back to England and yet another Scottish manager, Matt Busby, teamed Denis with the likes of George Best and Bobby Charlton at Manchester United. Law became the King of the United faithful at Old Trafford, though he ended his career with another year at Manchester City. He and his family still live in Manchester.

GOR001098727
The King by Denis Law
Denis Law
Used - Very Good
Paperback
Transworld Publishers Ltd
2004-08-02
384
0553815598
9780553815597
N/A
Book picture is for illustrative purposes only, actual binding, cover or edition may vary.
This is a used book - there is no escaping the fact it has been read by someone else and it will show signs of wear and previous use. Overall we expect it to be in very good condition, but if you are not entirely satisfied please get in touch with us.