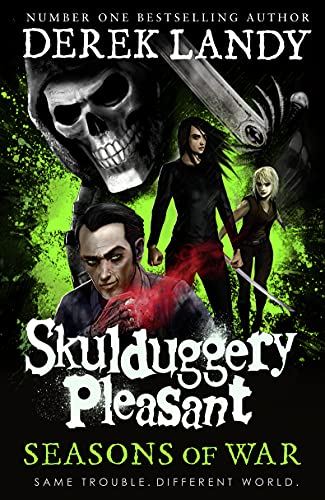 Seasons of War
by Derek Landy

In Stock
£14.99
The thirteenth thrilling novel in the internationally bestselling Skulduggery Pleasant series, SEASONS OF WAR will test the Skeleton Detective and Valkyrie like never before...
New£14.99
5 in stock

The thirteenth thrilling novel in the internationally bestselling Skulduggery Pleasant series, SEASONS OF WAR will test the Skeleton Detective and Valkyrie like never before...

To avert catastrophe, Skulduggery and Valkyrie are sent on a secret mission that takes them away from everything they know, to a forsaken land of magic and grim, unrelenting terror. It is here that Valkyrie will have to fight the hardest - not only against the enemies who want her dead, but also against her own self-destructive impulses. It's only by crawling through darkness that she'll be able to once again stand in the light...

'Landy [has the] ability to craft an engaging story from start to finish.' Inis

'Derek Landy has been something of a publishing phenomenon.' Irish Post

'Landy's witty style will win him fans of all ages ... It's a good job Harry's [Potter] resigning before he's forcibly retired.' Irish Mail on Sunday

'Skulduggery Pleasant serves up a thoroughly satisfying blend of humour, magic and adventure. Once you've met Stephanie and Skullduggery, you'll be clamouring for a sequel.' Rick Riordan, author of the PERCY JACKSON series

NGR9780008386238
Seasons of War (Skulduggery Pleasant, Book 13) by Derek Landy
Derek Landy
Skulduggery Pleasant
New
Hardback
HarperCollins Publishers
2020-04-02
560
0008386234
9780008386238
N/A
Book picture is for illustrative purposes only, actual binding, cover or edition may vary.
This is a new book - be the first to read this copy. With untouched pages and a perfect binding, your brand new copy is ready to be opened for the first time.