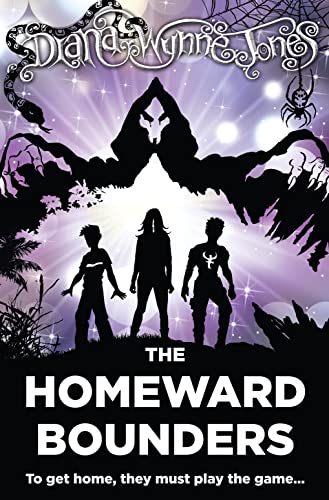 "You are now a discard. We have no further use for you in play. You are free to walk the Bounds, but it will be against the rules for you to enter play in any world. If you succeed in returning Home, then you may enter play again in the normal manner."

"You are now a discard. We have no further use for you in play. You are free to walk the Bounds, but it will be against the rules for you to enter play in any world. If you succeed in returning Home, then you may enter play again in the normal manner."

When Jamie unwittingly discovers the scary, dark-cloaked Them playing games with human's lives, he is cast out to the boundaries of the worlds. Only then does he discover that there are a vast number of parallel worlds, all linked by the bounds, and these sinister creatures are using them all as a massive gamesboard.

Clinging to Their promise that if he can get Home he is free, he becomes the unwilling Random Factor in an endless game of chance.

Irresistible Diana Wynne Jones fantasy adventure, featuring an insect-loving shapeshifter, an apprentice demon hunter and a whole host of exotic characters clinging to the hope that one day they will return Home.

'[Wynne Jones] has a unique record of producing books you can't forget... Every book is different. And every book is likely to be in someone's top seven... I feel we need to acknowledge how lucky those of us are who grew up on her books, and to ensure subsequent generations enjoy the same intense and subtle pleasure.' The Guardian

"...Her hallmarks include laugh-aloud humour, plenty of magic and imaginative array of alternate worlds. Yet, at the same time, a great seriousness is present in all of her novels, a sense of urgency that links Jones's most outrageous plots to her readers' hopes and fears..." Publishers Weekly

GOR000530183
The Homeward Bounders by Diana Wynne Jones
Diana Wynne Jones
Used - Very Good
Paperback
HarperCollins Publishers
2000-11-06
256
0006755259
9780006755258
N/A
Book picture is for illustrative purposes only, actual binding, cover or edition may vary.
This is a used book - there is no escaping the fact it has been read by someone else and it will show signs of wear and previous use. Overall we expect it to be in very good condition, but if you are not entirely satisfied please get in touch with us.