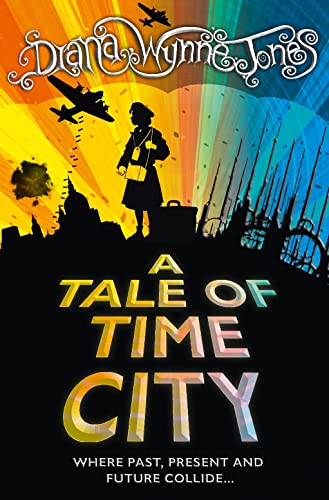 A Tale of Time City
by Diana Wynne Jones

When Vivian is evacuated from London in 1939, she expects to be staying in the countryside. Instead, she is whisked away to Time City - a place that exists outside time and space.

A Tale of Time City Summary

A Tale of Time City by Diana Wynne Jones

When Vivian is evacuated from London in 1939, she expects to be staying in the countryside. Instead, she is whisked away to Time City - a place that exists outside time and space.

It is a strange and remarkable place, where technology rules - yet important events of both past and future are marked by the appearance of mysterious Time Ghosts.

Here, a Time Patrol works to preserve historical events - but unknown rogue time-travellers are plotting to take control and are stealing the wards that protect the city. If they succeed, Time City and History as we know it will both be destroyed.

Jonathan and Sam are convinced that Vivian can help to save their home - for, astonishingly, she appears as a Time Ghost herself in a forgotten part of the city. But how can she possibly know what to do, when the important event hasn't even happened yet?!

A Tale of Time City Reviews

'[Wynne Jones] has a unique record of producing books you can't forget... Every book is different. And every book is likely to be in someone's top seven... I feel we need to acknowledge how lucky those of us are who grew up on her books, and to ensure subsequent generations enjoy the same intense and subtle pleasure.' The Guardian

"Diana Wynne Jones could teach Stephen King and JK Rowling a thing or two ... [she] has a skill for inserting just the right amount of detail in her written words, leaving you satiated but not stuffed." SFX

GOR001404963
A Tale of Time City by Diana Wynne Jones
Diana Wynne Jones
Used - Very Good
Paperback
HarperCollins Publishers
2000-06-05
368
0006755208
9780006755203
N/A
Book picture is for illustrative purposes only, actual binding, cover or edition may vary.
This is a used book - there is no escaping the fact it has been read by someone else and it will show signs of wear and previous use. Overall we expect it to be in very good condition, but if you are not entirely satisfied please get in touch with us.