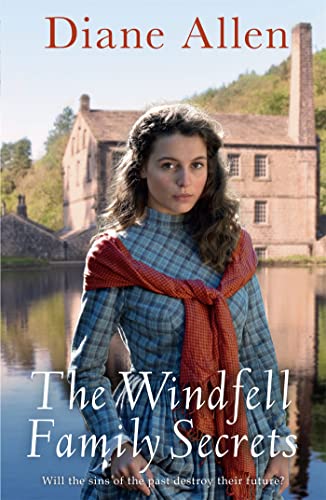 Used Price
£4.49
New RRP £6.99
Free Shipping in the UK
The past catches up with Charlotte Booth in the warm-hearted sequel to Diane Allen's The Mistress of Windfell Manor
Very Good Good Well Read

A moving Yorkshire saga, The Windfell Family Secrets is the much anticipated follow up to Diane Allen's The Mistress of Windfell Manor.

Twenty-one years have passed since Charlotte Booth fought to keep Ferndale Mill and her home at Windfell Manor following her traumatic first marriage. Now, highly regarded in local society and happily married to her childhood sweetheart, Archie Atkinson, she seeks only the best for their children, Isabelle and Danny. But history has a habit of repeating itself when Danny's head is turned by a local girl of ill repute, despite his promise of marriage to the far more respectable Harriet Armstrong.

Meanwhile, the beautiful and secretive Isabelle shares all the traits of her biological father, the notorious Joseph Dawson. And when she announces that she is to marry John Sidgwick, the owner of High Mill in Skipton, her mother quickly warns her against him. An ex-drinking mate of her late father who faces bankruptcy, Charlotte fears his interest in Isabelle is founded more upon self-preservation than any notions of love. What she doesn't realize is how far he's willing to go to protect his future . . .

If you are a lover of historical sagas and the sweep of the northern hills and their romance, then this novel is definitely for you * Historical Novel Society *
An enthralling tale packed with emotion, drama and the harsh realities of life in 19th century northern England * Lancashire Post *

Diane Allen was born in Leeds, but raised at her family's farm deep in the Yorkshire Dales. After working as a glass engraver, raising a family and looking after an ill father, she found her true niche in life, joining a large-print publishing firm in 1990. She is the author of For a Father's Pride and The Mistress of Windfell Manor, and now concentrates on her writing full time. She has recently been made Honorary Vice President of the Romantic Novelists' Association. Diane and her husband Ronnie live in Long Preston, in the Yorkshire Dales, and have two children and four beautiful grandchildren.

GOR008731130
The Windfell Family Secrets by Diane Allen
Diane Allen
Windfell Manor Trilogy
Used - Very Good
Paperback
Pan Macmillan
2017-10-19
384
1447295145
9781447295143
N/A
Book picture is for illustrative purposes only, actual binding, cover or edition may vary.
The book has been read, but looks new. The book cover has no visible wear, and the dust jacket is included if applicable. No missing or damaged pages, no tears, possible very minimal creasing, no underlining or highlighting of text, and no writing in the margins.