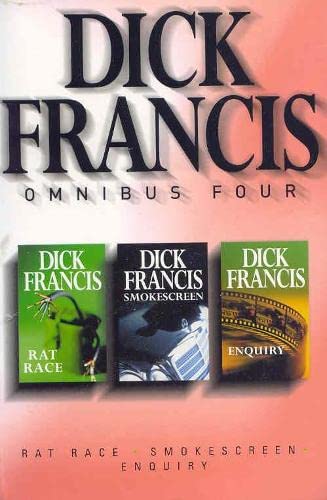 In Stock
£4.99
Now in one combined edition, three novels by Dick Francis set to captivate his many fans and new readers alike.
Very Good Good Well Read
Only 3 left

Dick Francis has been thrilling readers for over thirty years with his stories involving the world of racing with plenty of action, suspense, greed and secrets.

ENQUIRY: No jockey likes being labelled a cheat and Kelly Hughes' career seems doomed. He knows he's been framed, but finding the reason could prove dangerous. Especially with a killer on his tail...

RAT RACE: Matt Shore, an experienced pilot, is expecting the quiet life ferrying high class punters around England's race courses. But then his plane explodes in a massive fireball and he's landed in middle of a nightmare world. Some quiet life.

SMOKESCREEN: Film action man, Edward Lincoln, has been asked by a dying friend to find out why her South African racing stable were no longer winning. Now he's being forced to play the resourceful hero for real - or die in one easy take.

Dick Francis has written forty-one international bestsellers and is widely acclaimed as one of the world's finest thriller writers. His awards include the Crime Writer's Association's Cartier Diamond Dagger for his outstanding contribution to the crime genre, and an honorary Doctorate of Humane Letters from Tufts University of Boston. In 1996 Dick Francis was made a Mystery Writers of America Grand Master for a lifetime's achievement and in 2000 he recieved a CBE in the Queen's Birthday Honours list.

GOR001088915
Dick Francis Omnibus Four: Enquiry, Rat Race, Smokescreen by Dick Francis
Dick Francis
Used - Very Good
Paperback
Pan Macmillan
2000-11-10
896
0330484842
9780330484848
N/A
Book picture is for illustrative purposes only, actual binding, cover or edition may vary.
This is a used book - there is no escaping the fact it has been read by someone else and it will show signs of wear and previous use. Overall we expect it to be in very good condition, but if you are not entirely satisfied please get in touch with us.