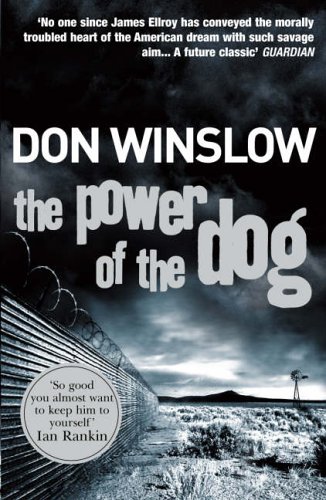 The Power of the Dog
by Don Winslow

In Stock
£6.99
A novel that features a mixed group of characters, each in his or her own way seeking some sort of salvation or redemption. It talks about the plot: how the US government and some of its quasi-autonomous agencies (CIA, FBI, DEA) all for their own reasons sponsored and financed the development of the drug cartels and their trade in Mexico.
Very Good Good
Only 2 left

The Power of the Dog Summary

The Power of the Dog by Don Winslow

'Breathtaking' JEREMY CLARKSON
'Winslow's masterpiece (so far) ... should have a place on every crime freak's bookshelf. Superb' INDEPENDENT ON SUNDAY
_______________________
A brilliant page-turning thriller of power and revenge on the front lines of the drug war.

Drug lord Miguel Angel Barrera is head of the Mexican drug federacion, responsible for millions of dollars worth of cocaine traffic into the US and the torture and murder of those who stand in its way. His nephew, Adan Barrera, is his worthy successor.

Art Keller is a US government operative, so determined to obtain revenge for a murdered colleague that his pursuit of the cartel veers dangerously towards an obsession outside the law. In a brutal world filled with striking characters, from a high class prostitute to an Irish hitman and a charismatic Catholic priest, everyone is in search of some kind of salvation - or damnation...

Don Winslow's masterpiece is not only a page-turning thriller but also a rich and compelling novel in the league of James Ellroy or Don DeLillo.
_______________________
The Cartel, the blockbuster sequel to The Power of the Dog, is also available.

The Power of the Dog Reviews

The Power of the Dog throws shadows a mile long. Fearless, humane, aesthetically fervent, it's also passionate, unapologetic, gorgeously written and unquestionably authentic. * Dennis Lehane *
Don Winslow is the kind of cult writer who is so good you almost want to keep him to yourself. -- Ian Rankin
The first great dope novel since Dog Soldiers thirty years ago. It's frightening and sad, with a superbly sustained intensity. A beautifully compressed vision of hell, with all its attendant moral madness. -- James Ellroy
A damn good read. If you've never read Don Winslow, start now. -- Val McDermid
It is impossible in a few words to do [it] justice ... It's a huge book, both in size and scope. * Sunday Telegraph *

Don Winslow has worked as a movie theatre manager, a production assistant, and as a private investigator. In addition to being a novelist he now works as an independent consultant in issues involving litigation arising from criminal behaviour. His novels include The Kings of Cool, Savages, The Death and Life of Bobby Z, California Fire and Life, The Power of the Dog, The Winter of Frankie Machine and The Dawn Patrol. In 2012 Savages was released as a blockbuster film.

GOR001212060
The Power of the Dog by Don Winslow
Don Winslow
Used - Very Good
Paperback
Cornerstone
2006-04-27
560
0099464985
9780099464983
N/A
Book picture is for illustrative purposes only, actual binding, cover or edition may vary.
This is a used book - there is no escaping the fact it has been read by someone else and it will show signs of wear and previous use. Overall we expect it to be in very good condition, but if you are not entirely satisfied please get in touch with us.