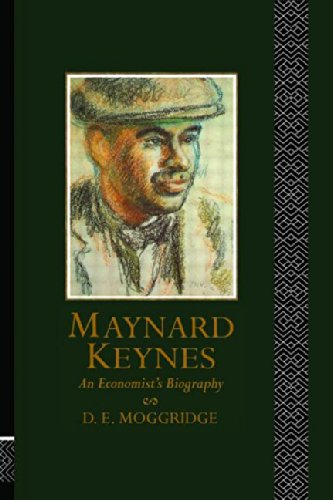 In Stock
£6.99
This biography of the most influential economist of the twentieth century traces Keynes' career from academic Cambridge, to artistic Bloomsbury, to official Whitehall and to the City. We see the roots of Keynes' achievements and failures.
Good
Only 1 left

Based on an intimate knowledge of the subject and his environment, this biography of the most influential economist of the twentieth century traces Keynes' career on all its many levels. From academic Cambridge, to artistic Bloomsbury, to official Whitehall and to the City, we see the intellectual roots of Keynes' achievements and failures. We also see how he left his mark on the modern world.

"Keynes firmly believed that economists' lives were worth studying as a way of illuminating their ideas; and Donald Moggridge's monumental new biography does this quite brilliantly for JMK' himself."
-Niall Ferguson, "The Daily Mail
..."in a single...volume, "Maynard Keynes: An Economist's Biography, Canadian scholar D.E. Moggridge offers a sound, analytical, carefully researched account of the man who invented deficit spending...he sets forth the facts and issu es with precision and sharp intelligence."
-Merle Rubin, "The Christian Science Monitor
"[Moggridge] writes throughout with a great sureness of touch . . . combining an outsider's perspective with an instinctive insider's knowledge. It is an admirable biography . . . wise and readable."
-Roy Jenkins, "The Observer
." . . a biography of Keynes that is more up-to-date and more thorough than any of its predecessors . . . the comprehensiveness of this work will insure its status as the standard academic biography of Keynes for some time."
-"Choice
"I have learned an enormous amount from this book. I had known Keynes well as a fellow working economist from the 1920s to the end of his life in 1945. But by the 1920s he was already the great man and confidant of senior statesmen. I had known little of his earlier life, of his relations to his Bloomsbury and Charleston friends and of them to Lydia, of how he came belatedly to economics through philosophy. Nor did I know the detail of his public life. All this Don Moggridge has been able to discover and record with very great detail and skill."
-Sir Austin Robinson, University of Cambridge

1. Forbears and Childhood 2. Eton 3. King's Undergraduate 4. Post-Graduate 5. Moore and Keynes' Early Beliefs Appendix 1 - The Dating of Ethics in Relation to Conduct Appendix 2 - Keynes' 1915 Meeting with D.H. Lawrence 6. Probability 7. Civil Servant to Don 8. The Young Economist 9. Bloomsbury 10. War 11. External Finance in Total War 12. Negotiating the Peace 13. Economic Consequences of the Peace 14. Adjustments to a Way of Life 15. Reparations and Journalism 16. Lydia and Maynard 17. The Return to Gold 18. Industry and Politics 19. The Emergence of the Treatise Appendix 3 - Keynes and Protection 20. Crisis, Criticism and New Directions 21. Towards The General Theory 22. International Affairs and the Arts 23. Fertile of Mind, Frail of Body 24. How to Pay for the War 25. 'Scraping the Bottom of the Box' 26. The Clearing Union 27. Domestic 'New Jerusalems' 28. Bretton Woods 29. The Shadow of Debt 30. The Loan 31. The Last Months Annex I - A Key to Keynes' Loves, 1901-15 Bibliography Dramatis Personae Index

GOR008309859
Maynard Keynes: An Economist's Biography by Donald Moggridge
Donald Moggridge
Used - Good
Paperback
Taylor & Francis Ltd
1995-09-07
992
0415127114
9780415127110
N/A
Book picture is for illustrative purposes only, actual binding, cover or edition may vary.
This is a used book - there is no escaping the fact it has been read by someone else and it will show signs of wear and previous use. Overall we expect it to be in very good condition, but if you are not entirely satisfied please get in touch with us.