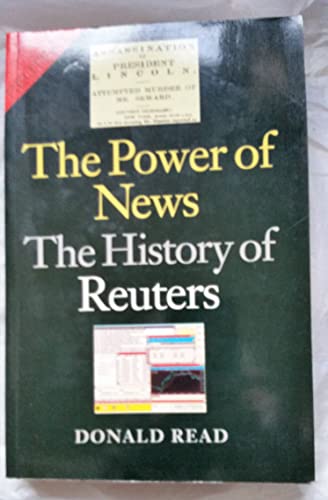 The Power of News
by Donald Read

In Stock
£4.49
This history of the Reuters news organization describes how the company has always been in the forefront of communications technology, from the days of pigeon post and the first transatlantic cables to the age of the satellite and computer link.
Very Good
Only 2 left

The Power of News Summary

The Power of News: History of Reuters by Donald Read

In 1851 Julius Reuter moved from Berlin to London where he and his staff of one office boy set up the telegraph office that was to evolve into one of the most powerful news agencies in the world. For over a century, Reuters, as it came to be named, was the news agency of the British Empire, committed to providing "truth in news" and doing so quickly, two standards of reporting that it maintains to this very day. And for over 150 years, Reuters has been a part the great revolution in world communications, from the days of overland and undersea telegraphs, to modern computer links and satellites.
In The Power of News, Donald Read presents the history of this communications giant, from its beginnings in 1851 to the company's decision to go public in 1984. Read shows how the completion of the world's first translatlantic cable in July 1866 launched Reuters into a new era of cable communication, bringing news to the world more quickly than ever. News of Lincoln's election as President in 1861 had taken eight days to reach London, while news of Grant's 1869 victory took only one day. Read also reveals how Reuters profited greatly for its wartime reports, from the Austro-Prussian War in 1866, to the Franco-Prussian War in 1870, to the momentous 1914 telegram ("Sarajevo Ferdinand Deste assassine") at the start of World War I. Read also traces the agency's post-World War II days under the leadership of Christopher Chancellor, who transformed the agency into an international organization that sold its services in many languages across the world, from Argentina, to Africa, to Japan. He delves into Reuters' profitable business of supplying economic information--its delivery of stock market and commodity prices and the successful Reuter Monitor Money Rates service launched in 1973. And he shows how this financial success was important to Reuters' independence and objectivity of reporting. (During wartime, and throughout its history, Reuters' subsidization by the British Government had drawn criticism that the agency was "partial to things British.") And for the first time, Read presents the story behind the controversial decision to float the agency as a public company in 1984.
The first to report the building of the Berlin Wall in 1961, and the first to report its fall in 1989, Reuters has remained at the forefront of worldwide communications. Revealing the failures as well as the successes, The Power of News tells the fascinating story of the company that has been bringing us history in the making for over a hundred fifty years.

About the Author
Donald Read is Professor Emeritus of Modern English History, University of Kent.

GOR000996635
The Power of News: History of Reuters by Donald Read
Donald Read
Used - Very Good
Hardback
Oxford University Press
1992-10-29
446
0198217765
9780198217763
N/A
Book picture is for illustrative purposes only, actual binding, cover or edition may vary.
This is a used book - there is no escaping the fact it has been read by someone else and it will show signs of wear and previous use. Overall we expect it to be in very good condition, but if you are not entirely satisfied please get in touch with us.