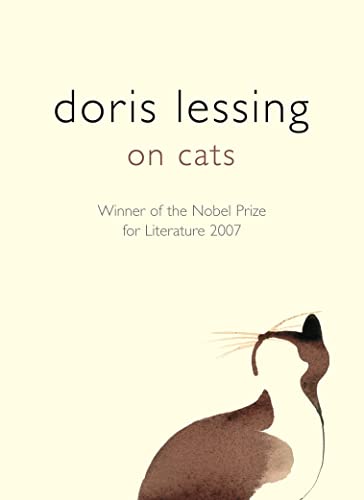 On Cats
by Doris Lessing

A collection of charming and celebrated writings about cats, from Doris Lessing, winner of the Nobel Prize for Literature.

On Cats by Doris Lessing

A collection of charming and celebrated writings about cats, from Doris Lessing, winner of the Nobel Prize for Literature.

Doris Lessing's love affair with cats began at a young age, when she became intrigued with the semi-feral creatures on the African farm where she grew up. Her fascination remained undiminished by the handsome domesticated creatures who shared her flats and her life in London and grew into real love with El Magnifico, the awkwardly lovable cat who in his later years suffered the great indignity of becoming a three-legged beast.

Consisting of Lessing's celebrated collection of stories, `Particularly Cats and Rufus', and the poignant though unsentimental memoir, `The Old Age of El Magnifico', this book is a brilliant evocation of the feline world.

`A distillation of everything that makes her work such a joy to read...Lessing's intensely visual imagination and coolly precise style fleshes out this feline life. A work of exquisite tenderness and poignancy, thoroughly devoid of artifice, over-elaboration or mawkish sentimentality...Wonderful.' Scotsman

`"Particularly Cats" is not really about cats at all, it's about real characters.' Daily Mail

`An unsentimental and unwhimsical, but not unpartisan, study of cat-and-human relationships. An entertaining read for both cat and Lessing connoisseurs.' Observer

GOR001033031
On Cats by Doris Lessing
Doris Lessing
Used - Very Good
Paperback
HarperCollins Publishers
2008-10-20
256
0007285515
9780007285518
N/A
Book picture is for illustrative purposes only, actual binding, cover or edition may vary.
This is a used book - there is no escaping the fact it has been read by someone else and it will show signs of wear and previous use. Overall we expect it to be in very good condition, but if you are not entirely satisfied please get in touch with us.