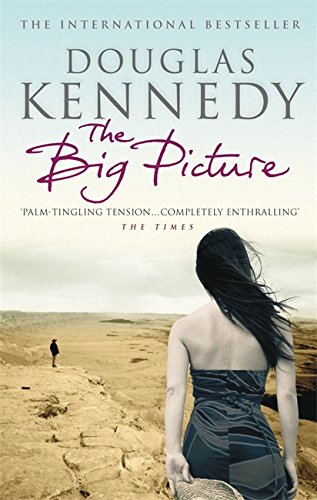 The Big Picture
by Douglas Kennedy

In Stock
£4.49
*A fiendishly clever, yet serious tale of middle-class frustration that will touch anyone who has ever wanted to escape their life. The Thriller goes into a new domain - The Real World.
Very Good Good
7 in stock

The Big Picture by Douglas Kennedy

On the face of it, Ben Bradford is your standard Wall Street hot shot - Junior partner in a legal firm, 6 figure income, wife and two young kids straight out of a Gap catalogue. But along with the WASP lifestyle comes the sting - Ben hates it. He wants - has always wanted - to be a photographer.

When he discovers his wife has fallen in love with another man, the consequences of a moment of madness force him to question not just the design of his life but the price of fulfilment. Because finding yourself means nothing when you're pretending to be someone else.

From the picket fences of yuppie New England to Montana's untouchable splendour, The Big Picture spans states and states of mind in a thrilling novel of genuine originality.

Reviews for The Big Picture

'The Horse Whisperer recast by Patricia Highsmith ... a compulsive page-turner and a dark moral
fable' Mail on Sunday

This astonishingly assured first novel, by an American working in London as a journalist, has a breathless readability that is rare...The book is more than just a compelling read: it also has poignant and moving things to say about lost opportunities and wasted lives in America, the cynical quality of sudden fame, the awfulness of willed separation from deeply loved children * Publishers Weekly, starred review *
Palm-tingling sensation ... captivating ... a completely convincing imaginative performance ... enthralling * THE TIMES *
THE HORSE WHISPERER recast by Patricia Highsmith ... a compulsive page-turner and a dark moral fable * MAIL ON SUNDAY *
Kennedy's skill is to send you racing down the slope of sheer story * ESQUIRE *
A ferociously plotted, hip and funny thriller * INDEPENDENT ON SUNDAY *

Douglas Kennedy's previous twelve novels include the critically acclaimed bestsellersThe Big Picture, The Pursuit of Happiness, A Special Relationship and The Moment. He is also the author of three highly-praised travel books. The Big Picture was filmed with Romain Duris and Catherine Deneuve; The Woman in the Fifth with Ethan Hawke and Kristin Scott Thomas.

GOR001214910
The Big Picture by Douglas Kennedy
Douglas Kennedy
Used - Very Good
Paperback
Little, Brown Book Group
2003-08-07
384
0349117381
9780349117386
N/A
Book picture is for illustrative purposes only, actual binding, cover or edition may vary.
This is a used book - there is no escaping the fact it has been read by someone else and it will show signs of wear and previous use. Overall we expect it to be in very good condition, but if you are not entirely satisfied please get in touch with us.