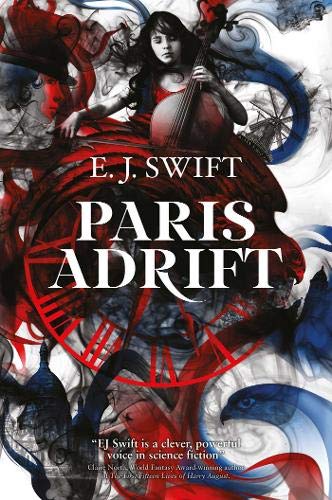 Determined to escape her old life, misfit and student geologist Hallie packs up her life in England and heads to Paris. She falls in with the eclectic expat community as a bartender at the notorious Millie's, located next to the Moulin Rouge. Here she meets Gabriela, a bartender who guides her through this strange nocturnal world, and begins to find a new family. But Millie's is not all that it seems: a bird warns Hallie to get her feathers in order, a mysterious woman shows up claiming to be a chronometrist, and Gabriela is inexplicably unable to leave Paris. Then Hallie discovers a time portal located in the keg room. Over the next nine months, irate customers will be the least of her concerns, as she navigates time-faring through the city's turbulent past and future, falling in love, and coming to terms with her own precarious sense of self.

E. J. Swift is the author of the Osiris Project trilogy (Osiris, Cataveiro and Tamaruq), a speculative fiction series set in a world radically altered by climate change. Her short fiction has been nominated for the Sunday Times EFG Short Story Award ("The Spiders of Stockholm") and the BSFA award for short fiction ("Saga's Children"), and has appeared in a variety of publications from Solaris, Salt Publishing, NewCon Press and Jurassic London. Swift also contributed to Strata - an interactive digital project by Penguin Random House.

GOR009038659
Paris Adrift by E.J. Swift
E.J. Swift
Used - Very Good
Paperback
Rebellion
2018-02-08
320
1781085935
9781781085936
N/A
Book picture is for illustrative purposes only, actual binding, cover or edition may vary.
This is a used book - there is no escaping the fact it has been read by someone else and it will show signs of wear and previous use. Overall we expect it to be in very good condition, but if you are not entirely satisfied please get in touch with us.