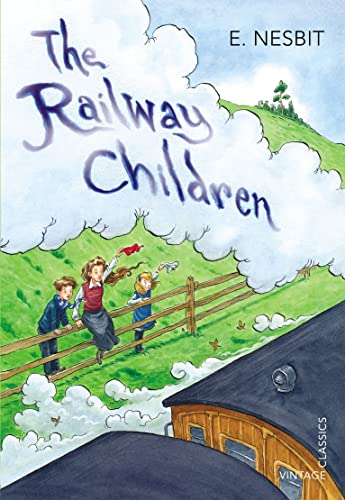 The Railway Children
by E. Nesbit

In Stock
£2.39
'"Stand firm'" said Peter, "and wave like mad!"' They were not railway children to begin with. When their Father mysteriously leaves home Roberta (everyone calls her Bobbie), Phyllis and Peter must move to a small cottage in the countryside with Mother.
Very Good
9 in stock

The Railway Children by E. Nesbit

'"Stand firm'" said Peter, "and wave like mad!"' They were not railway children to begin with. When their Father mysteriously leaves home Roberta (everyone calls her Bobbie), Phyllis and Peter must move to a small cottage in the countryside with Mother. It is a bitter blow to leave their London home, but soon they discover the hills and valleys, the canal and of course, the railway. But with the thrilling rush and rattle and roar of the trains comes danger too. Will the brave trio come to the rescue? And most importantly, can they solve the disappearance of their Father? BACKSTORY: Find out all about steam trains and learn what it was really like to be a child in Edwardian times.

"It's a story that was written more than 100 years ago, yet The Railway Children commands the affections of the British people like few other fictions" * Daily Telegraph *
"Guaranteed to jerk a tear from the most stony-faced child" * Observer *
"The Railway Children was one of the first children's classics I ever read. I wasn't sure I was going to enjoy it. I started reading the story and was immediately gripped. E. Nesbit remembered exactly what it felt like to be a child" -- Jacqueline Wilson
"Her child characters were remarkable in her day because they are so entirely human. They are intelligent, vain, aggressive, humorous, witty, cruel, compassionate. . . in fact, they are like adults" -- Gore Vidal
"So what makes these different to any other set of classics? In a moment of inspiration Random House had the bright idea of actually asking Key stage 2 children what extra ingredients they could add to make children want to read. And does it work? Well, put it this way...my 13-year-old daughter announced that she had to read a book over the summer holiday and, without any prompting, spotted The Boy in the Striped Pyjamas...and proceeded to read it! Now, if you knew my 13-year-old daughter, you would realise that this is quite remarkable. She reads texts, blogs and tags by the thousand - but this is the first book she has read since going to high school, so all hail Vintage Classics!" * National Association for the Teaching of English *

Edith Nesbit was born in 1858. Her father died when she was only three and so her family moved all over England. Poverty was something she had known first hand, both as a child and as a young married woman with small children. Like the Railway Childrens' Mother, she was forced to try and sell her stories and poems to editors. Her first children's book, The Treasure Seekers, was published in 1899. She also wrote Five Children and It but her most famous story is The Railway Children which was first published in 1905 and it hasn't been out of print since. Edith Nesbit was a lady ahead of her time - she cut her hair short, which was considered a very bold move in Victorian times, and she was a founding member of a group that worked towards improvements in politics and society called The Fabian Society. She died in 1924.

GOR004776453
The Railway Children by E. Nesbit
E. Nesbit
Used - Very Good
Paperback
Vintage Publishing
2012-08-01
320
0099572990
9780099572992
N/A
Book picture is for illustrative purposes only, actual binding, cover or edition may vary.
This is a used book - there is no escaping the fact it has been read by someone else and it will show signs of wear and previous use. Overall we expect it to be in very good condition, but if you are not entirely satisfied please get in touch with us.