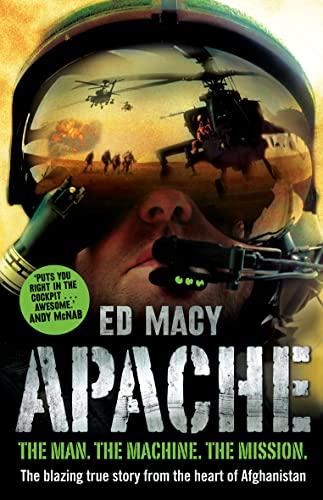 An astonishing first book, Apache is a story of courage, comradeship, technology and tragedy, during the ongoing war in Afghanistan.

An astonishing first book, Apache is a story of courage, comradeship, technology and tragedy, during the ongoing war in Afghanistan.

'Apache' is the first book to come from the cockpit of the most sophisticated fighting helicopter the world has ever known. Designed in the mid 1980s to take on the Soviets, these machines have proven themselves as the perfect tool for combat in Afghanistan.

Ed Macy's account of the incredibly hard Apache selection process, tougher than that of the SAS, combined with his description of the sheer difficulty of flying one of these helicopters provides a fascinating insight into the relationship between man and machine fighting in the toughest conditions imaginable.

The climactic build-up to the rescue mission at Jugroom Fort is both dramatic and deeply moving. The rescue of Lance Corporal Mathew Ford has been hailed as one of the most remarkable and daring rescues of modern wartime and Ed's bravery on the ground at Jugroom Fort led to him being awarded the Military Cross - one of the first in the Army Air Corps' history.

Taking the reader right to the heart of the war in Afghanistan, 'Apache' offers an unprecedented degree of proximity to the action and horror that troops in the region are faced with on a daily basis. Gripping from the first page to the last, it is utterly compelling, extremely touching and impossible to put down.

Ed Macy left the British Army in January 2008, after twenty-three years' service. He had amassed a total of 3,930 helicopter flying hours, 645 of them inside an Apache. Ed was awarded the Military Cross for his courage during the Jugroom Fort rescue in Helmand Province, Afghanistan - one of the first ever in Army Air Corps' history. 'Apache' is his first book. He hopes it won't be his last.

GOR001131977
Apache by Ed Macy
Ed Macy
Used - Very Good
Paperback
HarperCollins Publishers
2008-09-01
400
0007288182
9780007288182
N/A
Book picture is for illustrative purposes only, actual binding, cover or edition may vary.
This is a used book - there is no escaping the fact it has been read by someone else and it will show signs of wear and previous use. Overall we expect it to be in very good condition, but if you are not entirely satisfied please get in touch with us.