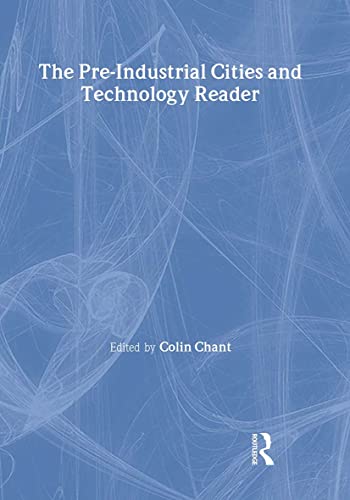 In Stock
£4.99
Complied as a reference source for students, this Reader is divided into three main sections, presenting key readings on: Ancient Cities, Medieval and Early Modern Cities, and Pre-Industrial Cities in China and Africa.
Very Good
Only 1 left

The Pre-Industrial Cities Reader is designed to be used on its own or as a companion volume to the accompanying Pre-Industrial Cities: Open University textbook, in the same series. Compiled as a reference source for students, this reader is divided into three main sections, presenting key readings on: Ancient Cities, Medieval and Early Modern Cities, and Pre-Industrial Cities in China and Africa. Among the technologies discussed are: agricaultural innovations such as the heavy plough, water transport, the medieval road revolution, the first urban public transport, aqueducts, building materials such as brick and Roman concrete, weaponry and fortifications, water clocks, street lighting, and fire-fighting. Among the cities covered are: Uruk, Babylon, Thebes, Athens, Rome, Constantinople, Baghdad, Siena, Florence, Antwerp, London, Paris, Amsterdam, Mexico City, Hangzhou, Beijing and Hankou.

"This book explains how towns and cities have been shaped by applications of a range of technologies, and the influence of politics, economics, culture and environment. Cities covered include: Babylon, Thebes, Athens, Rome, Constantinople, Florence, Paris, Amsterdam, Mexico City, and Beijing. Containing few line drawing and photographs, it is a good addition to students' personal libraries.."
-"The Bibliography of Ancient Egypt

GOR001198624
The Pre-Industrial Cities and Technology Reader by Edited by Colin Chant
Edited by Colin Chant
Cities and Technology
Used - Very Good
Paperback
Taylor & Francis Ltd
1998-12-17
288
0415200784
9780415200783
N/A
Book picture is for illustrative purposes only, actual binding, cover or edition may vary.
This is a used book - there is no escaping the fact it has been read by someone else and it will show signs of wear and previous use. Overall we expect it to be in very good condition, but if you are not entirely satisfied please get in touch with us.