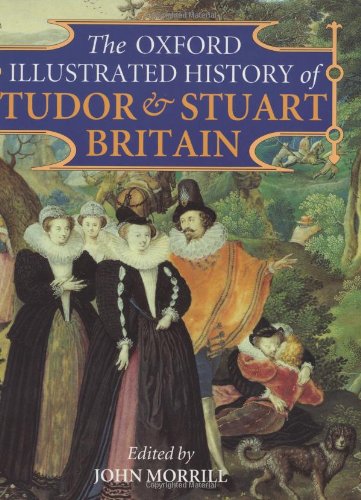 The Oxford Illustrated History of Tudor and Stuart Britain
by Edited by J. S. Morrill

In Stock
£7.49
Two centuries of change are covered by this work. It covers the Reformation, the civil wars, and two Revolutions. The text explores the political, social, religious, and cultural history of this time, which marked Britain's emergence as the most liberal and mature of European states.
Very Good Good Well Read
8 in stock

The Oxford Illustrated History of Tudor and Stuart Britain Summary

The Oxford Illustrated History of Tudor and Stuart Britain by Edited by J. S. Morrill

The Tudor and Stuart centuries are among the most dramatic in the history of the British Isles. From Henry VIII's divorce from Catherine of Aragon to Charles I's beheading and the Glorious Revolution that sent James II ignominiously into exile, radical solutions were found to old problems - with far-reaching effects on monarchy, state, and people alike. These centuries witnessed the Reformation, the civil wars, and two Revolutions, in which two monarchs, two wives of a king, and two archbishops of Canterbury were tried and executed, and hundreds of men and women tortured and burned in the name of religion. Yet in the same period an explosion of literacy and the printed word, transformations in landscapes and townscapes, new forms of wealth, new structures of power, and new forms of political participation freed minds and broadened horizons. It was an age which marked Britain's emergence as the most liberal and mature of European states. The Oxford Illustrated History of Tudor and Stuart Britain now chronicles and analyses all these events. Written by eighteen leading scholars, this exciting and richly illustrated work explores the political, religious, and cultural history of the period. It covers every aspect of this tumultuous age, from the manoeuvrings of rulers and power-brokers, to the profound social changes that affected the lives of ordinary men and women throughout Britain. Over 200 black and white illustrations and 24 pages of colour plates complement all aspects of the text, and the volume also contains a chronology and glossary together with maps and family trees of the monarchy. Contributors...Simon Adams, University of Strathclyde John Adamson, University of Cambridge Christopher Brooks, University of Durham Steven Ellis, University College, Galway Amy Louise Erickson, University of Sussex Mark Goldie, University of Cambridge Andrew Gurr, University of Reading John Guy, University of St Andrews Christopher Haigh, University of Oxford Wallace MacCaffrey, Harvard University John Morrill (ed.) , University of Cambridge Diarmaid MacCulloch, University of Oxford Rosemary O'Day, Open University John Reeve, University of Sydney Conrad Russell, University of London Kevin Sharpe, University of Southampton John Walter, University of Essex Thomas Webster, University of East Anglia

About Edited by J. S. Morrill

About the Editor:
John Stephen Morrill is Reader in the Faculty of History at the University of Cambridge. The author or editor of 14 books, he is Vice President of the Royal Historical Society.

GOR001202873
The Oxford Illustrated History of Tudor and Stuart Britain by Edited by J. S. Morrill
Edited by J. S. Morrill
Used - Very Good
Hardback
Oxford University Press
1996-06-06
464
019820325X
9780198203254
N/A
Book picture is for illustrative purposes only, actual binding, cover or edition may vary.
This is a used book - there is no escaping the fact it has been read by someone else and it will show signs of wear and previous use. Overall we expect it to be in very good condition, but if you are not entirely satisfied please get in touch with us.