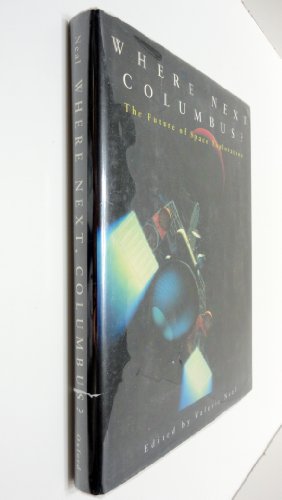 Where Next, Columbus?
by Edited by Valerie Neal

In Stock
£3.99
This collection of essays, inspired by the 500th anniversary of Columbus' discovery of the New World, discusses past, present and future exploration not only of the Earth, but also of our galaxy. The physical, technical and social challenges of space exploration are examined.
Very Good Good
Only 3 left

Where Next, Columbus? Summary

Where Next, Columbus?: Future of Space Exploration by Edited by Valerie Neal

In the decades since the launch of Sputnik, the world has thrilled to the moon walks of the Apollo astronauts, marvelled at photographs of the outer planets brought to us by Voyager, and watched in horror as Challenger exploded before our eyes. No longer the terrifying realm of science fiction, space has been hailed by popular culture as the `final frontier', the focal point of future exploration. Yet today there is no strong consensus about our future in space. Where should we go next? Mars? Deep space? Is it worth the cost to explore space at all? Now, a curator of space history at the Smithsonian, Valerie Neal, has assembled a noted group of writers and thinkers to consider such questions. The result is an intriguing collection of essays that offer stimulating insights into the past, present, and future exploration of new worlds, and the physical, technical, and social challenges to space exploration. Harrison H. Schmitt - the last astronount to set foot on the moon - describes the poetry of an earth-rise, and makes a compelling case for human rather than robot explorers. Stephen Jay Gould pleads for a manned mission to Mars, one which would scour the Red Planet for signs of life. And physicist Robert L. Forward offers detailed plans for actual starships that could send astronauts to the nearest star system in a single lifetime. Complete with more than fifty colour illustrations, Where Next, Columbus? is a highly colourful and utterly absorbing contribution to a debate that may help define the twenty-first century.

About Edited by Valerie Neal

About the Editor:
Valerie Neal is a Curator of Space History at the National Air and Space Museum of the Smithsonian Institution. She has written about Spacelab missions and has worked on the support teams for four Space Shuttle flights.

GOR001131803
Where Next, Columbus?: Future of Space Exploration by Edited by Valerie Neal
Edited by Valerie Neal
Used - Very Good
Paperback
Oxford University Press Inc
1995-01-19
231
0195092775
9780195092776
N/A
Book picture is for illustrative purposes only, actual binding, cover or edition may vary.
This is a used book - there is no escaping the fact it has been read by someone else and it will show signs of wear and previous use. Overall we expect it to be in very good condition, but if you are not entirely satisfied please get in touch with us.