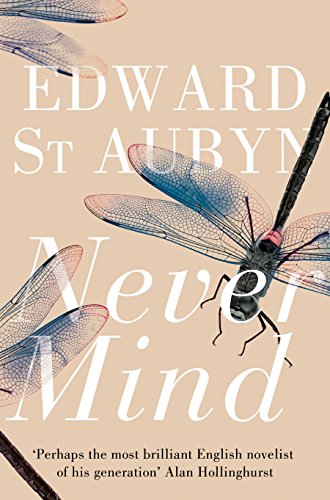 The first novel in the acclaimed Patrick Melrose series.

At his mother's family house in the south of France, Patrick Melrose has the run of a magical garden. Bravely imaginative and self-sufficient, five-year-old Patrick encounters the volatile lives of adults with care. His father, David, rules with considered cruelty, and Eleanor, his mother, has retreated into drink. They are expecting guests for dinner. But this afternoon is unlike the chain of summer days before, and the shocking events that precede the guests' arrival tear Patrick's world in two.

Never Mind was originally published, along with Bad News and Some Hope, as part of a three book omnibus , also called Some Hope.

`The Melrose sequence is now clearly one of the major achievements of contemporary British fiction. Stingingly well-written and exhilaratingly funny' David Sexton, Evening Standard
'Perhaps the most brilliant English novelist of his generation' Alan Hollinghurst
`St Aubyn puts an entire family under a microscope, laying bare all its painful, unavoidable complexities. At once epic and intimate, appalling and comic, the novels are masterpieces, each and every one' Maggie O'Farrell
`St Aubyn's prose has an easy charm that masks a ferocious, searching intellect. One of the finest writers of his generation' The Times
`Nothing about the plots can prepare you for the rich, acerbic comedy of St Aubyn's world - or more surprising - its philosophical density' Zadie Smith, Harpers
`Humor, pathos, razor-sharp judgement, pain, joy and everything in between. The Melrose novels are a masterwork for the 21st century, by one of our greatest prose stylists' Alice Sebold
`From the very first lines I was completely hooked . . . By turns witty, moving and an intense social comedy, I wept at the end but wouldn't dream of giving away the totally unexpected reason' Antonia Fraser, Sunday Telegraph
`Blackly comic, superbly written fiction . . . His style is crisp and light; his similes exhilarating in their accuracy . . . St Aubyn writes with luminous tenderness of Patrick's love for his sons' Caroline Moore, Sunday Telegraph
`I've loved Edward St Aubyn's Patrick Melrose novels. Read them all, now' David Nicholls
`Wonderful caustic wit . . . Perhaps the very sprightliness of the prose - its lapidary concision and moral certitude - represents the cure for which the characters yearn. So much good writing is in itself a form of health' Edmund White, Guardian
`Clearly one of the major achievements of contemporary British fiction. Stingingly well-written and exhilaratingly funny' David Sexton, Evening Standard
`Beautifully written, excruciatingly funny and also very tragic' Mariella Frostrup, Sky Magazine
`The act of investigative self-repair has all along been the underlying project of these extraordinary novels. It is the source of their urgent emotional intensity, and the determining principle of their construction. For all their brilliant social satire, they are closer to the tight, ritualistic poetic drama of another era than the expansive comic fiction of our own . . . A terrifying, spectacularly entertaining saga' James Lasdun, Guardian
`His prose has an easy charm that masks a ferocious, searching intellect. As a sketcher of character, his wit - whether turned against pointless members of the aristocracy or hopeless crack dealers - is ticklingly wicked. As an analyser of broken minds and tired hearts he is as energetic, careful and creative as the perfect shrink. And when it comes to spinning a good yarn, whether over the grand scale or within a single page of anecdote, he has a natural talent for keeping you on the edge of your seat' Melissa Katsoulis, The Times
`The Patrick Melrose novels can be read as the navigational charts of a mariner desperate not to end up in the wretched harbor from which he embarked on a voyage that has led in and out of heroin addiction, alcoholism, marital infidelity and a range of behaviors for which the term `self-destructive' is the mildest of euphemisms. Some of the most perceptive, elegantly written and hilarious novels of our era. . . Remarkable' Francine Prose, New York Times
`St Aubyn conveys the chaos of emotion, the confusion of heightened sensation, and the daunting contradictions of intellectual endeavour with a force and subtlety that have an exhilarating, almost therapeutic effect' Francis Wyndham, New York Review of Books
`A masterpiece. Edward St Aubyn is a writer of immense gifts' Patrick McGrath
`Irony courses through these pages like adrenaline . . . Patrick's intelligence processes his predicaments into elegant, lucid, dispassionate, near-aphoristic formulations . . . Brimming with witty flair, sardonic perceptiveness and literary finesse' Peter Kemp, Sunday Times
`A humane meditation on lives blighted by the sins of the previous generation. St Aubyn remains among the cream of British novelists' Sunday Times
`The main joy of a St Aubyn novel is the exquisite clarity of his prose, the almost uncanny sense he gives that, in language as in mathematical formulae, precision and beauty invariably point to truth . . . Characters in St Aubyn novels are hyper-articulate, and the witty dialogue is here, as ever, one of the chief joys' Suzi Feay, Financial Times
'One of the most amazing reading experiences I've had in a decade.' Michael Chabon, LA Times
Edward St Aubyn's superbly acclaimed Melrose novels are Never Mind, Bad News, Some Hope, Mother's Milk (shortlisted for the Man Booker Prize 2006) and At Last. He is also the author of the novels A Clue to the Exit, On the Edge, Lost for Words and Dunbar.
GOR003913702
9781447202936
1447202937
Never Mind by Edward St Aubyn
Edward St Aubyn
The Patrick Melrose Novels
Used - Very Good
Paperback
Pan Macmillan
2012-04-12
208
Winner of Betty Trask Award 1992 (UK)
Book picture is for illustrative purposes only, actual binding, cover or edition may vary.
This is a used book - there is no escaping the fact it has been read by someone else and it will show signs of wear and previous use. Overall we expect it to be in very good condition, but if you are not entirely satisfied please get in touch with us
Trustpilot