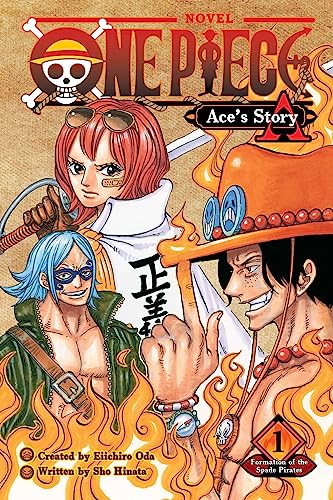 Used Price
£6.99
Free Shipping in the UK
Adventure on the high seas continue in these stories featuring the characters of One Piece!
Like New

One Piece: Ace's Story, Vol. 1: Formation of the Spade Pirates by Eiichiro Oda

Adventure on the high seas continue in these stories featuring the characters of One Piece!

Get the backstory on Luffy's brother Ace! This volume contains the origin story of Luffy's adopted brother Ace, and tales of his thrilling quest for the legendary One Piece treasure.

Washed up on the shores of a deserted island at the edge of the East Blue Sea, two men from different backgrounds unite in their shared thirst for adventure. One of them, Portgaz D. Ace, will follow in his infamous father's footsteps as the fearless captain of a pirate crew. The other, Masked Deuce, becomes the reluctant first member of Ace's Spade Pirates. Survival is not enough for these seafaring buccaneers, as together they seek treasure, excitement, and a route to the New World.

Eiichiro Oda began his manga career at the age of 17, when his one-shot cowboy manga Wanted! won second place in the coveted Tezuka manga awards. Oda went on to work as an assistant to some of the biggest manga artists in the industry, including Nobuhiro Watsuki, before winning the Hop Step Award for new artists. His pirate adventure One Piece, which debuted in Weekly Shonen Jump magazine in 1997, quickly became one of the most popular manga in Japan.

GOR010821834
One Piece: Ace's Story, Vol. 1: Formation of the Spade Pirates by Eiichiro Oda
Eiichiro Oda
One Piece Novels
Used - Like New
Paperback
Viz Media, Subs. of Shogakukan Inc
2020-06-10
144
197471330X
9781974713301
N/A
Book picture is for illustrative purposes only, actual binding, cover or edition may vary.
The book has been read, but looks new. The book cover has no visible wear, and the dust jacket is included if applicable. No missing or damaged pages, no tears, possible very minimal creasing, no underlining or highlighting of text, and no writing in the margins.