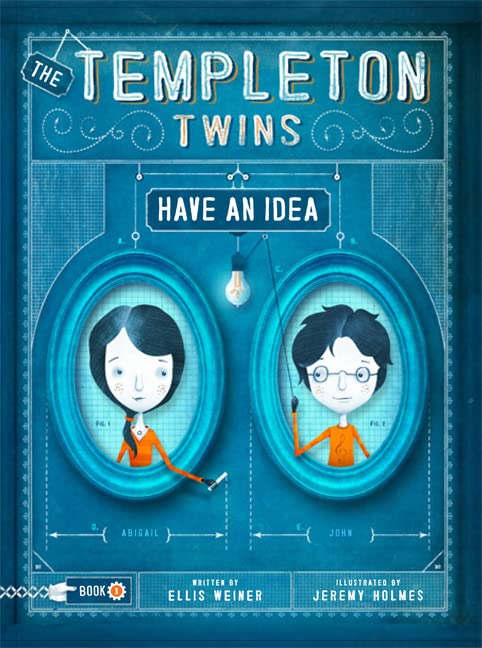 Templeton Twins Have an Idea
by Ellis Weiner

In Stock
£6.99
Abigail and John, the Templeton twins, and their dog Cassie, foil a pair of inept kidnappers intent on stealing one of their father's newest inventions.
Very Good
Only 2 left

Templeton Twins Have an Idea Summary

Templeton Twins Have an Idea by Ellis Weiner

Suppose there were 12-year-old twins, a boy and girl named John and Abigail Templeton. Let's say John was pragmatic and played the drums, and Abigail was theoretical and solved cryptic crosswords. Now suppose their father was a brilliant, if sometimes confused, inventor. And suppose that another set of twins-adults-named Dean D. Dean and Dan D. Dean, kidnapped the Templeton twins and their ridiculous dog in order to get their father to turn over one of his genius (sort of) inventions. Yes, I said kidnapped. Wouldn't it be fun to read about that? Oh please. It would so. Luckily for you, this is just the first in a series perfect for boys and girls who are smart, clever, and funny (just like the twins), and enjoy reading adventurous stories (who doesn't?!).

Templeton Twins Have an Idea Reviews

"This book is for those students who enjoy a little sarcasm with their humor." - Library Media Connection
"A great book for kids who love puzzles and humor. Weiner's narrators steal the show with their use of sarcasm and wit." - Halley Pucker, Boswell Book Company, Milwaukee, Wisconsin
"An entertaining start to a new series." - School Library Journal
"Illustrations.play up the story's humor as well as highlighting the twins' ingenuity." - The Horn Book
"The most prominent character is the self-satisfied and aggressively intrusive Narrator, whose banter with readers instantly sets a comedic, sarcastic tone" - Publishers Weekly
"This book a) is extraordinarily snarky, b) has glorious illustrations, c) is sure to be a hit, d) all of the above?" - NerdyBookClub.com
"The scene-hogging narrator steals the show in this clever series opener." - Kirkus Reviews
"A rip roaring fun read that is a must share." - Shannon Messenger/Marvelous Middle Grade Monday
"An irresistible start to a planned series" - Common Sense Media
"Readers... will welcome this and the duo's future exploits." - Booklist
"Anyone with a sly sense of humor is sure to love this book and cry out for "More, please!" " - Reading Today
"The narrator plays as big a role (or bigger) as any of the characters, constantly wisecracking, setting up scenes and occasionally berating the reader." - SFGate.com
"This entertaining series will win over word lovers, mystery and puzzle solvers, fans of gadgets and those who previously had not thought of themselves as readers" - Shelf Awareness, starred review
"A page-turning and funny tale." -Shelf Awareness for Readers, starred review
"A hilarious and clever adventure " - Education.com
"The narrator's antics are one of the book's great charms" - Time Out Chicago Kids, Best New Kit Lit Series of 2012
"If you've got smart (or maybe smart-mouthed) kids, they'll get a kick out of The Templeton Twins" - Wired.com's GeekDads

The first in a funny, illustrated young-teen series about two resourceful children who foil kidnappers bent on stealing their brilliant father's ideas. This debut novel has a fast-paced plot, clever heroes, evil (albeit buffoonish) villains, a sly sense of humour and is filled with puns, word games, puzzles and even a recipe for meatloaf! Illustrations by internationally acclaimed artist Jeremy Holmes give the book even more kid appeal and make it a visual stand-out.

GOR004710307
Templeton Twins Have an Idea by Ellis Weiner
Ellis Weiner
Templeton Twins
Used - Very Good
Hardback
Chronicle Books
2011-11-01
232
0811866793
9780811866798
Commended for Parents Choice Awards (Fall) (2008-Up) (Fiction) 2012 Short-listed for Virginia Readers Choice Award (Elementary) 2015 Short-listed for Rhode Island Children's Book Awards 2014
Book picture is for illustrative purposes only, actual binding, cover or edition may vary.
This is a used book - there is no escaping the fact it has been read by someone else and it will show signs of wear and previous use. Overall we expect it to be in very good condition, but if you are not entirely satisfied please get in touch with us.