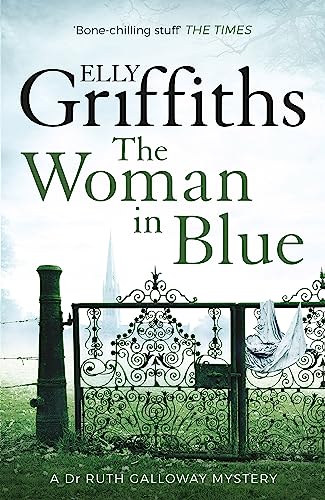 The Woman In Blue
by Elly Griffiths

The Woman In Blue Summary

The Woman In Blue: The Dr Ruth Galloway Mysteries 8 by Elly Griffiths

When Ruth's friend Cathbad sees a vision of the Virgin Mary, in a white gown and blue cloak, in Walsingham's graveyard, he takes it in his stride. Walsingham has strong connections to Mary, and Cathbad is a druid after all; visions come with the job. But when the body of a woman in a blue dressing-gown is found dead the next day in a nearby ditch, it is clear that a horrible crime has been committed, and DCI Nelson and his team are called in for what is now a murder investigation.

Ruth, a devout atheist, has managed to avoid Walsingham during her seventeen years in Norfolk. But then an old university friend asks to meet her in the village, and Ruth is amazed to discover that she is now a priest. She has been receiving vitriolic anonymous letters targeting women priests - letters containing references to local archaeology and a striking phrase about a woman 'clad in blue, weeping for the world'.

Then another woman is murdered - a priest. As Walsingham prepares for its annual Easter re-enactment of the Crucifixion, the race is on to unmask the killer before they strike again...

Customer Reviews - The Woman In Blue

The Woman In Blue Reviews

One of my current favourite crime series . . . a pleasure from start to finish -- Val McDermid
Griffiths has become a dab hand at plotting and cranking up the tension. The murders, and the muddled humanity of the characters, keep us turning the pages * Independent *
Crime that doesn't sacrifice good writing and clever characterisation for the sake of the plot -- Sarra Manning * Red magazine *
Elly Griffiths writes ever-more ingenious detective stories with a powerful sense of place and a varied cast of sympathetic and unusual characters. Her heroine is a winner. * The Times *
Griffiths weaves superstition and myth into her crime novels, skilfully treading a line between credulity and modern methods of detection * Sunday Times *
Ruth Galloway is one of the most engaging characters in modern crime fiction * Kate Mosse *
Griffiths has that rare ability to write simple and unaffected prose which has a powerful impact, and her work is proof that it is often the lightest of touches which pierces the deepest. * Crime Fiction Lover *
Ruth Galloway is solitary, plum and smart and self-assured, and very, very likeable. * Globe and Mail *

GOR007687679
The Woman In Blue: The Dr Ruth Galloway Mysteries 8 by Elly Griffiths
Elly Griffiths
The Dr Ruth Galloway Mysteries
Used - Very Good
Paperback
Quercus Publishing
2016-07-28
384
1848663374
9781848663374
N/A
Book picture is for illustrative purposes only, actual binding, cover or edition may vary.
This is a used book - there is no escaping the fact it has been read by someone else and it will show signs of wear and previous use. Overall we expect it to be in very good condition, but if you are not entirely satisfied please get in touch with us.