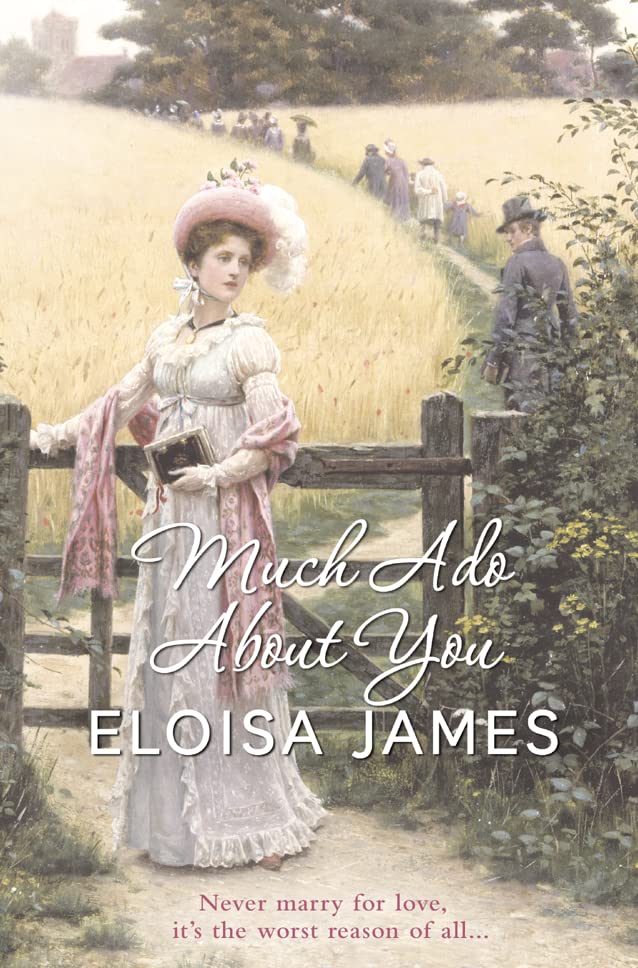 Much Ado About You
by Eloisa James

Much Ado About You Summary

Much Ado About You by Eloisa James

Never marry for love, it's the worst reason of all...

Finding herself under the unlikely guardianship of the kind but shambolic Duke of Holbrook, Tess Essex is suddenly faced with her duty: marry well and marry quickly. Once that's taken care of she can arrange matches for her three younger sisters: Annabel, Imogen and Josephine.

But just when everything looks like it might be in order Tess's own fiance gets cold feet and one of her sisters elopes with a reckless young lord...

And is Tess really as sensible and proper as she thinks she is? Lucius Felton is a rogue whose own mother considers him irredeemable but he is delicious and obscenely wealthy...Surely she can't really be contemplating marriage to one of London's most infamous rakes?

Absurd as it seems Tess fears she may have fallen utterly and completely in love...

Much Ado About You Reviews

Praise for MUCH ADO ABOUT YOU:

`So full of dashing cads in breeches that it's got me seriously hot under the collar. Bravo for Eloisa!' FIONA WALKER

`Great fun and love the modern take on a classic Regency romance, with all its nods and winks to Austen...a great achievement that matches fast-paced romance with well-crafted social observation.' FIONA WALKER

`Great fun! I couldn't put it down. Move over Georgette Heyer!' DAISY WAUGH

`Hurrah! Romance is back in fashion. No grisly body count, no lurking serial killer. The only four-letter word is love. Choc-full of romantic heroes that would give Darcy a run for his money. Sheer joy from beginning to end.' Carole Matthews

`There's nothing old-fashioned about the very spicy love scenes.' The Seattle Times

Eloisa James is a professor of English literature, specializing in Shakespeare. She teaches at Fordham University in New York City, and lives in New Jersey. Oxford University Press published her academic book in 2000. Eloisa's books have been translated into Dutch, Russian, German, Polish, French and Spanish. She is the daughter of poet Robert Bly (winner of the American Book Award for Poetry) and short story author Carol Bly. Eloisa's godfather was the poet James Wright, winner of the Pulitzer Prize for his Collected Poems. Among those poems - and one of Wright's most beloved - is a poem written for his goddaughter, Mary Bly (aka Eloisa James).

GOR000934032
Much Ado About You by Eloisa James
Eloisa James
Used - Very Good
Paperback
HarperCollins Publishers
2006-09-01
352
0007229488
9780007229482
N/A
Book picture is for illustrative purposes only, actual binding, cover or edition may vary.
This is a used book - there is no escaping the fact it has been read by someone else and it will show signs of wear and previous use. Overall we expect it to be in very good condition, but if you are not entirely satisfied please get in touch with us.