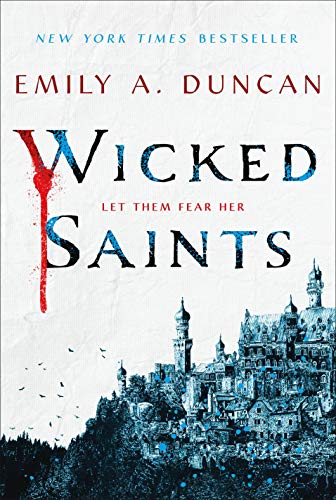 Wicked Saints
by Emily A. Duncan

Used Price
£12.99
Free Shipping in the UK
In this stunning Joan of Arc inspired debut, a peasant girl who can speak to the gods must find a way to work with a deadly adversary to turn the tide of the war and assassinate the mad king.
Reviews:
Trustpilot
Very Good

Wicked Saints: A Novel by Emily A. Duncan

When Nadya prays to the gods, they listen, and magic flows through her veins. For nearly a century the Kalyazi have been locked in a deadly holy war with Tranavian heretics, and her power is the only thing that is a match for the enemy's blood magic. But when the Travanian High Prince, and his army invade the monastery she is hiding in, instead of saving her people, Nadya is forced to flee the only home she's ever known, leaving it in flames behind her, and vengeance in her heart. As night falls, she chooses to defy her gods and forge a dangerous alliance with a pair of refugees and their Tranavian blood mage leader, a beautiful, broken boy who deserted his homeland after witnessing his blood cult commit unthinkable monstrosities. The plan? Assassinate the king and stop the war. But when they discover a nefarious conspiracy that goes beyond their two countries, everything Nadya believes is thrown into question, including her budding feelings for her new partner. Someone has been harvesting blood mages for a dark purpose, experimenting with combining Tranavian blood magic with the Kalyazi's divine one. In order to save her people, Nadya must now decide whether to trust the High Prince - her country's enemy - or the beautiful boy with powers that may ignite something far worse than the war they're trying to end.

BOOKRIOT, "20 YA Dark Fantasy Books For Your Winter TBR"

BUZZFEED, 29 YA Books You Absolutely Must Read This Spring

EPIC READS, The 16 Most Anticipated YA Books to Read in April

SYFY, 6 April YA Novels That are Out of This World

If you like your young adult fantasy full of ice, blood, and angst, Wicked Saints will sweep you up in its wintery embrace. - NPR, 3 Young Adult Novels To Help You Out Of Hibernation

This dark fantasy starts off with a bang... The upfront presence of the gods adds an intriguing twist to a brutal story. The ending is as powerful as the opening, and there are explosive elements waiting to detonate in the expected sequels. - BOOKLIST

"If you love dark fantasy this book promises to be a brutal, enchanting gem, full of terrifying blood-magic." - BOOKRIOT, "20 Dark Fantasy Books For Your Winter TBR"

"Rarely does a dark, magical epic have so effective a character-grounded sense of humor." - BULLETIN OF THE CENTER OF CHILDREN'S BOOKS

Filled with stunning landscapes, engaging lore, and an enemies-to-lovers plot for the ages, Wicked Saints is a dense epic about magic, sacrifice, love, and betrayal. - NERDIST, 8 Books to Enjoy Until Netflix's SHADOW AND BONE

Emily A. Duncan's debut YA novel does not disappoint. It's thrilling and brutal, reading like a heavy metal song. And it's the first book in a trilogy! I cannot wait for books two and three--and for whatever else this blistering new talent writes. For Fans of: Authors of dark fantasy novels, like Leigh Bardugo. - PASTE MAGAZINE

Will leave readers hungry for a sequel. - PUBLISHERS WEEKLY

I highly recommend WICKED SAINTS to fantasy readers. Emily Duncan's writing style reminds me of Leigh Bardugo's. If you enjoyed the setting of Grisha Trilogy and the characters of SIX OF CROWS, I believe you will enjoy WICKED SAINTS. Duncan's debut novel is perfect for readers looking for intrigue, dark magic and betrayal on every page. - TEENREADS

"Prepare for a snow frosted, blood drenched fairy tale where the monsters steal your heart and love ends up being the nightmare. Utterly absorbing." - Roshani Chokshi, New York Times bestselling author of The Gilded Wolves and The Star-Touched Queen

Full of blood and monsters and magic--this book destroyed me and I adored it. Emily is a wicked storyteller, she's not afraid to hurt her characters or her readers. If you've ever fallen in love with a villain you will fall hard for this book. - Stephanie Garber, New York Times bestselling author of Caraval

This is the novel of dark theology and eldritch blood-magic that I've been waiting for all my life. It's got a world at once brutal and beautiful, filled with characters who are wounded, lovable, and ferocious enough to break your heart. A shattering, utterly satisfying read. - Rosamund Hodge, author of Cruel Beauty and Bright Smoke, Cold Fire

"Wicked Saints is a lush, brutal, compelling fantasy that is dark, deep, and bloody--absolutely riveting! With a boy who is both man and monster, mysterious saints with uncertain motives, and a girl filled with holy magic who is just beginning to understand the full reaches of her power, this gothic jewel of a story will sink its visceral iron claws into you, never letting go until you've turned the last page. And truthfully, not even then -the explosive ending will haunt you for days! " - Robin LaFevers, New York Times bestselling author of the His Fair Assassin trilogy

"Dark, bloody, and monstrously romantic. This is the villain love interest that we've all been waiting for." - Margaret Rogerson, New York Times bestselling author of An Enchantment of Ravens

Seductively dark and enchanting, Wicked Saints is a trance you won't want to wake from. Duncan has skillfully erected a world like no other, complete with provocative magic, sinister creatures, and a plot that keeps you guessing. This spellbinding YA fantasy will bewitch readers to the very last page. - Adrienne Young, New York Times bestselling author of Sky in the Deep

About Emily A. Duncan

EMILY A. DUNCAN is the New York Times bestselling author of Wicked Saints. She works as a youth services librarian and received a Master's degree in library science from Kent State University, which mostly taught her how to find obscure Slavic folklore texts through interlibrary loan systems. When not reading or writing, she enjoys playing copious amounts of video games and Dungeons & Dragons. She lives in Ohio.

GOR009959757
Wicked Saints: A Novel by Emily A. Duncan
Emily A. Duncan
Something Dark and Holy
Used - Very Good
Hardback
Wednesday Books
2019-04-02
400
1250195667
9781250195661
N/A
Book picture is for illustrative purposes only, actual binding, cover or edition may vary.
This is a used book - there is no escaping the fact it has been read by someone else and it will show signs of wear and previous use. Overall we expect it to be in very good condition, but if you are not entirely satisfied please get in touch with us.