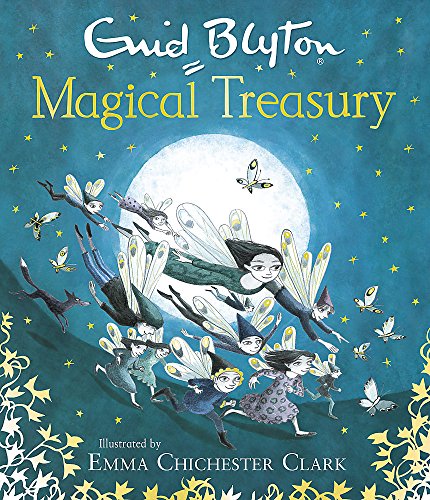 Used Price
£5.79
New RRP £19.99
Free Shipping in the UK
A stunning gift book that brings popular and little-known Blyton stories together with new illustrations by one of our best-loved illustrators.
Reviews:
Trustpilot
Very Good Good

Popular and little-known stories by one of the world's best-loved children's authors, Enid Blyton, brought together in a stunning gift book, illustrated by Emma Chichester Clark.

Enid Blyton was a storyteller who effortlessly transported readers to the enchanted lands of her imagination. In Blyton's world, carpets could grant wishes, rabbits rode on underground railways and magic doors and rabbit-holes took adventurous children into strange new worlds.

This collection, compiled by renowned Blyton experts Norman Wright and Mary Cadogan, combs the Blyton archive to select extracts from popular works such as The Magic Faraway Tree as well as forgotten tales from the hundreds of magazines Enid wrote and edited in the 40s and 50s.

The book is divided into six chapters, such as 'Wizards and Witches', 'Animal Magic', 'Extraordinary Objects' and Greedy Magic'. Renowned illustrator Emma Chichester Clark, who illustrated the cover for the 70th anniversary edition of Five Runaway Together has provided atmospheric black and white drawings and eight full-colour plates.

Emma Chichester Clark trained at the Chelsea College of Art and The Royal College of Art before becoming a full-time illustrator. She was awarded the Mother Goose Award in 1988 as the most promising newcomer to children's book illustration. She has since illustrated a number of picture books and collections for Orchard Books, Andersen Press, Pavilion and Methuen. For Orchard Emma illustrated The Orchard Book of Greek Myths in 1992 and in 1997 The Orchard Book of Greek Gods and Goddesses. Both books have been retold by award-winning writer Geraldine McCaughrean, who has retold a number of the Orchard Collections. Emma's lively illustrations perfectly match the magic of the stories which bring characters of Ancient Greece strikingly to life. Emma was also chosen to be one of eight artists to illustrate The Orchard Book of Opera Stories retold by Adele Geras which was published last Autumn to much acclaim. In 1998 Emma has joined forces with major poet and playwright, Adrian Mitchell, to illustrate his retelling of Robin Hood in The Adventures of Robin Hood and Maid Marian published in June. Emma has also written and illustrated a number of her own books, including Tea with Aunt Augusta, Miss Bilberry's New House and Little Miss Muppet Counts to Ten. She also illustrated some collections written by Laura Cecil including A Thousand Yards of Sea (Methuen), and has recently illustrated Thumbelina (Pavilion) and Little Red Riding Hood (Macdonald Young Books). Emma lives in Fulham in South West London, and has featured in the Illustrators Hall of Fame in The Mail on Sunday with other illustrators including Quentin Blake, Michael Foreman, Shirley Hughes, Anthony Browne and Raymond Briggs. Enid Blyton's books have sold over 500 million copies and have been translated into other languages more often than any other children's author. She wrote over 700 books and about 2,000 short stories, including favourites such as The Famous Five,The Secret Seven, The Magic Faraway Tree, Malory Towers and Noddy. Born in London in 1897, Enid lived much of her life in Buckinghamshire and adored dogs, gardening and the countryside. She died in 1968 but remains one of the world's best-loved storytellers.

GOR007000288
Enid Blyton's Magical Treasury by Emma Chichester Clark
Emma Chichester Clark
Used - Very Good
Hardback
Hachette Children's Group
2015-10-01
320
1444921339
9781444921335
N/A
Book picture is for illustrative purposes only, actual binding, cover or edition may vary.
This is a used book - there is no escaping the fact it has been read by someone else and it will show signs of wear and previous use. Overall we expect it to be in very good condition, but if you are not entirely satisfied please get in touch with us.