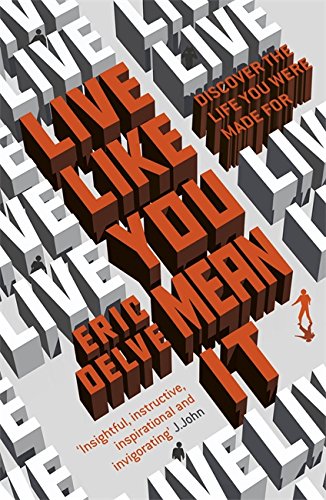 Out of Stock
Eric Delve challenges us all to live life to the full in the light of God's purpose.
Very Good
Only 0 left

This energetic and engaging call to live life to the full offers you the chance to rethink what matters to you and why, and to do something about it.

Too often we drift through life, going with the flow or being tossed by currents beyond our control, and failing to realise that if we would only fight for the life God meant us for life would be so much more fulfilling.

Eric Delve, the well-known evangelist and organiser of the Detling Festival, here sets out a strong argument for intentional living, the need to engage positively with the choices that face us and the rewards it will bring if we do so.

Along the way he challenges us to face up to who we really are, jettisoning pretence or fantasy, and to accept our humanity in its weakness and its high potential. Then he urges us to understand what God's purpose is for us and to let him guide us into the full life he wants for us - including standing firm through difficult times.

Finally he issues a challenge to us all, to escape from the modern curse of individualism and accept the need - and wonderful opportunity - to pass on all we've learnt in life to colleagues, friends and families - because they're worth it, too.

Beautifully written - it almost reads like a novel - bubbling over with hope and encouragement, Eric has given us an intriguing interpretation of the life of David 'the man after God's own heart' linking it with the life of David's greater son, Jesus. In doing so he gives us pointers to become as they were, people who live out God's dreams. * R.T. Kendall *
Eric Delve tackles the age-old question of what life is all about and how we can "Move beyond survival to success, and beyond success to significance." * Rob Parsons, Chairman, Care for the Family *
WOW! This book is INSIGHTFUL, INSTRUCTIVE, INSPIRATIONAL and INVIGORATING. * J.John *

Eric is vicar of St Luke's Maidstone, Kent and runs the Detling Festival. He travels extensively, speaking in churches and at conferences, and at Echoes in Eternity events around the country. THE LETTERS OF BILLY FIDGET, Eric Delve's collaboration with Nick Battle was also published by Hodder earlier in 2011.

GOR004714283
Live Like You Mean It by Eric Delve
Eric Delve
Used - Very Good
Paperback
Hodder & Stoughton General Division
2011-07-01
256
0340995041
9780340995044
N/A
Book picture is for illustrative purposes only, actual binding, cover or edition may vary.
This is a used book - there is no escaping the fact it has been read by someone else and it will show signs of wear and previous use. Overall we expect it to be in very good condition, but if you are not entirely satisfied please get in touch with us.