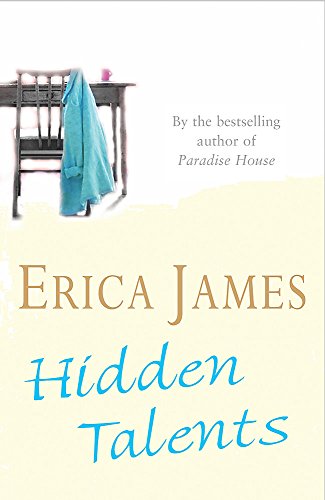 In Stock
£2.99
Bestselling author Erica James explores the stories of a potent mix of characters who meet at a creative writers' group.
Very Good
Only 2 left

Dulcie Ballantyne knows that creative writers' groups attract an unlikely mix of people, so when she starts up Hidden Talents, she is well prepared for the assortment of people she is bringing together.

Beth King is facing empty-nest syndrome as her only son, Nathan, leaves home for university. Jack Solomon, a local estate agent, is having trouble coming to terms with the shock of his wife leaving him for his best friend. Jaz Rafferty is an intensely private seventeen-year-old girl who writes to escape her large, boisterous family. Victor Blackmore is a know-it-all, who claims to be writing the blockbuster novel every publisher will be clamouring for.

What they all have in common is a need to escape, as well as a desire to keep their lives as private as possible. As they grow more confident in their writing skills, friendships develop, and gradually they come to realise that a little openness isn't necessarily a bad thing.

MEDIA 'beautifully executed' Sarah Broadhurst, The Bookseller Review in Juneissue of WOMAN & HOME and PRIMA. WOMAN ALIVE (Christian magazine) interviewed Erica in June issue and an interview also appeared in the LINCOLNSHIRE ECHO to pre-advertise the event at Ottakar's. Reviewed in KNUTSFORD GUARDIAN and LANCASHIRE EVENING TELEGRAPH EVENTSErica has visited several bookshops tocoincide with publication. Ottakar's, Lincoln and Ottakar's Wilmslow were both attended by about 35 people. Lincoln sold 36 copies of Hidden Talents, Wilmslow 22 copies. Erica also visited WHSmith's in Lincoln to sign stock. Her event at Ottakar's Crewe was also a success. The Summer Reading evening with Adele Geras, Rebecca Shaw and Sarah Harrison at Ottakar's, Stafford was unfortunately cancelled due to problems with the venue but as tickets sales were very strong we will be re-scheduling. Erica also attended the Hull Literary Lunch in April

Erica James is the number one international bestselling author of twenty novels, including the Sunday Times top ten bestsellers Summer at the Lake, The Dandelion Years and Song of the Skylark. She has sold over five million books worldwide and her work has been translated into twelve languages. Erica won the Romantic Novel of the Year Award for her novel Gardens of Delight, set in beautiful Lake Como, Italy, which has become a second home to her. Her authentic characters are thanks to her insatiable appetite for other people's business and a willingness to strike up a conversation with just about anybody. To find out more, visit her website or follow her on Twitter, Facebook or Instagram. www.ericajames.co.uk T@TheEricaJames f/ericajamesauthor/ I/the_ericajames

GOR008292913
Hidden Talents by Erica James
Erica James
Used - Very Good
Paperback
Orion Publishing Co
2003-02-22
496
0752849573
9780752849577
N/A
Book picture is for illustrative purposes only, actual binding, cover or edition may vary.
This is a used book - there is no escaping the fact it has been read by someone else and it will show signs of wear and previous use. Overall we expect it to be in very good condition, but if you are not entirely satisfied please get in touch with us.