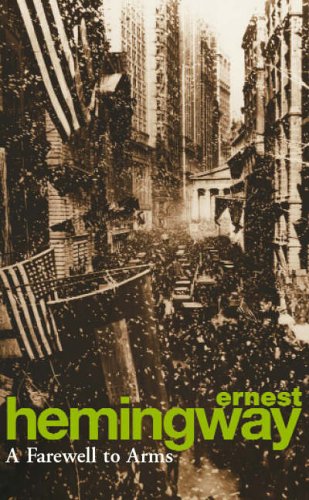 A Farewell To Arms
by Ernest Hemingway

Used Price
£3.29
New RRP £7.99
Free Shipping in the UK
In 1918 Ernest Hemingway went to war, to the 'war to end all wars'. A love story of immense drama and uncompromising passion, A Farewell to Arms offers a unique and unflinching view of the world and people, by the winner of the 1954 Nobel Prize for Literature.
Very Good Good Well Read

A Farewell To Arms Summary

A Farewell To Arms by Ernest Hemingway

In 1918 Ernest Hemingway went to war, to the 'war to end all wars'. He volunteered for ambulance service in Italy, was wounded and twice decorated. Out of his experiences came his early masterpiece, A Farewell to Arms. In an unforgettable depiction of war, Hemingway recreates the fear, the comradeship, the courage of his young American volunteers and the men and women he encounters along the way with conviction and brutal honesty. A love story of immense drama and uncompromising passion, A Farewell to Arms offers a unique and unflinching view of the world and people, by the winner of the 1954 Nobel Prize for Literature.

A Farewell To Arms Reviews

"Hard, almost metallic, glittering, blinding by the reflections of its hard surface, utterly free of sentimentality- a strange and original book, it will convince you of its honesty and veracity" -- Arnold Bennett
"A most beautiful, moving and humane book" -- Vita Sackville-West
"A novel of great power." * TLS *

GOR001229543
A Farewell To Arms by Ernest Hemingway
Ernest Hemingway
Used - Very Good
Paperback
Cornerstone
1994-08-18
304
0099910101
9780099910107
N/A
Book picture is for illustrative purposes only, actual binding, cover or edition may vary.
This is a used book - there is no escaping the fact it has been read by someone else and it will show signs of wear and previous use. Overall we expect it to be in very good condition, but if you are not entirely satisfied please get in touch with us.