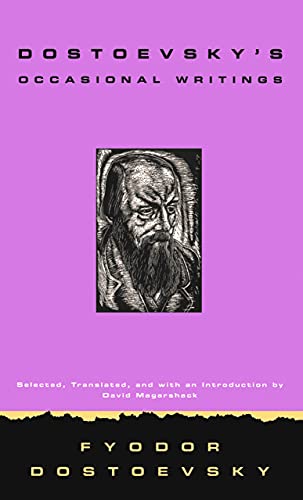 A collection of articles, sketches, and letters spanning 33 years in Fyodor Dostoevsky's writing career, from 1847, just after the successful publication of his first novel, until 1880, a year before his death.

A collection of articles, sketches, and letters spanning 33 years in Fyodor Dostoevsky's writing career, from 1847, just after the successful publication of his first novel, until 1880, a year before his death. This volume allows the reader to measure the broad scope of his artistic development and the changes that occurred as a result of such cataclysmic events as Dostoevsky's arrest and trial for treason and his subsequent imprisonment and exile in Siberia.
One of the most powerful and significant authors in all modern fiction, Fyodor Dostoevsky was the son of a harsh and domineering army surgeon who was murdered by his own serfs (slaves), an event that was extremely important in shaping Dostoevsky's view of social and economic issues. He studied to be an engineer and began work as a draftsman. However, his first novel, Poor Folk (1846), was so well received that he abandoned engineering for writing. In 1849, Dostoevsky was arrested for being a part of a revolutionary group that owned an illegal printing press. He was sentenced to be executed, but the sentence was changed at the last minute, and he was sent to a prison camp in Siberia instead. By the time he was released in 1854, he had become a devout believer in both Christianity and Russia - although not in its ruler, the Czar. During the 1860's, Dostoevsky's personal life was in constant turmoil as the result of financial problems, a gambling addiction, and the deaths of his wife and brother. His second marriage in 1887 provided him with a stable home life and personal contentment, and during the years that followed he produced his great novels: Crime and Punishment (1886), the story of Rodion Raskolnikov, who kills two old women in the belief that he is beyond the bounds of good and evil; The Idiot (1868), the story of an epileptic who tragically affects the lives of those around him; The Possessed (1872), the story of the effect of revolutionary thought on the members of one Russian community; A Raw Youth (1875), which focuses on the disintegration and decay of family relationships and life; and The Brothers Karamazov (1880), which centers on the murder of Fyodor Karamazov and the effect the murder has on each of his four sons. These works have placed Dostoevsky in the front rank of the world's great novelists. Dostoevsky was an innovator, bringing new depth and meaning to the psychological novel and combining realism and philosophical speculation in his complex studies of the human condition.

David Magarshack's translations include works by Dostoevsky, Turgenev, Chekhov, Gorky, and Pushkin. He has also written biographies of Dostoevsky and Gogol.

NGR9780810114739
9780810114739
0810114739
Dostoevsky's Occasional Writings by F.M. Dostoevsky
F.M. Dostoevsky
New
Hardback
Northwestern University Press
1997-07-30
376
N/A
Book picture is for illustrative purposes only, actual binding, cover or edition may vary.
This is a new book - be the first to read this copy. With untouched pages and a perfect binding, your brand new copy is ready to be opened for the first time
Trustpilot