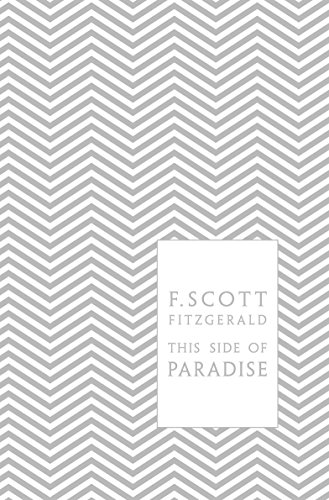 This Side of Paradise
by F. Scott Fitzgerald

This Side of Paradise Summary

This Side of Paradise by F. Scott Fitzgerald

Increasingly disillusioned by the rejection slips that studded the walls of his room and his on/off engagement to Zelda Sayre, Fitzgerald began his third revision of the novel that was to become This Side of Paradise.

The story of a young man's painful sexual and intellectual awakening that echoes Fitzgerald's own career, it is also a portrait of the lost generation that followed straight on from the First World War, 'grown up to find all Gods dead, all wars fought, all faiths in man shaken' and wanting money and success more than anything else.

Customer Reviews - This Side of Paradise

This Side of Paradise Reviews

"As nearly perfect as such a work could be . . . The glorious spirit of abounding youth glows throughout this fascinating tale. Amory, the romantic egotist, is essentially American." -The New York Times

"[A] bravura display of literary promise . . . Fitzgerald's prose is capable of soaring like a violin, and of moving his readers with understated husky notes as well as with notes of piercing purity . . . Fitzgerald knew that glamour was bound to fail, that there is an ineradicable human instinct for it which is utterly mistaken." -from the Introduction by Craig Raine

F. Scott Fizgerald was born in 1896 in St Paul, Minnesota, and went to Princeton University, which he left in 1917 to join the army. He was said to have epitomized the Jazz Age, which he himself defined as 'a generation grown up to find all Gods dead, all wars fought, all faiths in man shaken'. In 1920 he married Zelda Sayre. Their traumatic marriage and her subsequent breakdowns became the leading influence on his writing. Among his publications were five novels, This Side of Paradise, The Great Gatsby, The Beautiful and Damned, Tender is the Night and The Last Tycoon (his last and unfinished work). Fitzgerald died suddenly in 1940.